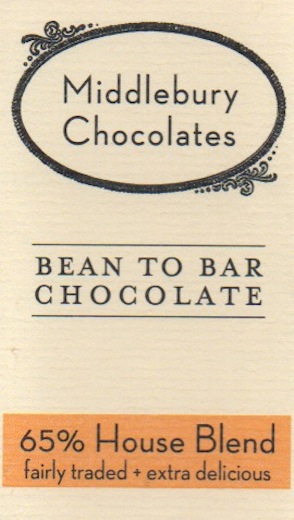 So when Stephanie & Andrew Jackson of Middlebury Chocolates offered this updated House Blend... ahhh, who can say 'no' to chocolate? Actually the C-spot® says so to a lot of (bad) chocolate.

Thankfully their latest features tough-gum Texture but much better pitch on the palm sugar for a more synchronized blend (only slight disjoints) with a mineralized salted-caramel entrance, some back fruit underlay + a Tootsie Roll® to a mudpie finish, a sign that MIddlebury roasted thru to eliminate that objectionable raw ending of the earlier release.

The Rating & Metrics to the right reflect the upgraded bar. Below is the original review of the lesser version in its entirety.

... [it] has become a manufacturing location / no retail. One of the owners is pregnant with their 3rd child so production has decreased. The manufacturing plant on Route 7S looks dead. On the door a poster lists retail outlets. The owners also sell their wares at a local farmer's market.

For the record, Middlebury Chocolates plans to move to a more productive space in partnership with a local chocolatier. Also in the the works is direct collaboration & importing of cocoa from South & Central America. Thru it all, it hopes to remain a grassroots plant even as it expands the reach of its network.

This then a bar in celebration of maternity leave. Sorry, Hillary, maybe you chose to leave the house instead of bake cookies in the kitchen but some apparently would rather stay home to make chocolate; perhaps some batched with, by, &/or for the newborn. Ahhh, how sweet.

Or to the echo of George Carlin: F the children.

To which the children respond: F outta here, George.

Babies, after all, are here to replace crotchety adults. And with worrisome trends among certain demographics & countries, their numbers must increase to cover social security & pension programs.

Above all, the world needs them for sustainability; to grow up to be good consumers, to keep the momentum behind the Ponzi scheme that is the global economy based on growth models of exploitative &/or extractive wealth. Both fluid capital & fluid labor (such as migrant workers, the tools in immigration policy for pandering politicians bent on vanity to cashier as votes under the guise of compassion) ensure downward pressure on wages so that commodities, for example -- especially in the agricultural sector where chocolate flounders -- stay depreciated if not depressed, perpetuating cycles of low income / dependence yet cheap abundant fodder for mass consumption. (A mouthful, ay?)

On the bright side, look at it this way: 7 going on 9 billion creatives... one of whom is bound to invent a way out of this morass. Such as the Iter Project in southern France that continues humankind's quest for a breakthrough in nuclear fusion; a collaborative int'l effort to create an unlimited supply of clean energy independent of Big Oil's chokehold & thereby help solve climate change.

Palm sugar (discussed more at length in the Quality section of Middlebury's Balinese bar) carries a good portion of the weight (over a third) &, moreover, taints the Flavor (largely responsible for the caramelized FXs, absent any appreciable Maillard reactions thanks to a light roast). Cacáo manages to get upright & cut thru however in a rather Bolivian countenance (those purpling fruits) with an assist from salt which Middlebury utilizes in the same manner as Zotter -- as seasoning rather than flavoring.