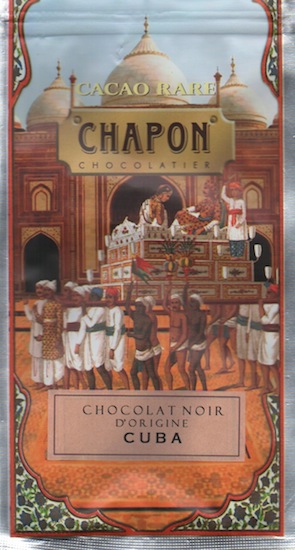 Impact
Dunno about the connection conveyed on this wrapper (click image on the right to enlarge): a raj paraded around by coolies in front of what appears the Taj Mahal. What does it have to with a humble bar of chocolate from Cuba?

Ever the ethno-botanists, the French represented here by Chapon could be implying that maybe both cacáo & Cuba are ready for a royal breakout once the island survives the Castro regime. The way India did the Mughal Dynasty for instance... only to precipitate the arrival & spread of the British Empire.

Conventional wisdom holds that once Fidel & Raoul go, Washington -- at the behest of Cuban exiles in South Florida -- will re-appropriate Cuba, turning into another Puerto RIco.

Now that the axis of the global economy is shifting east toward India & China, such a development presents its own kind of hackneyed thinking. The future no doubt will one day subject it to its own particular verdict, for nothing is inevitable until it happens.
Appearance   3.9 / 5

hi-grade bulk
Mouthfeel   12.8 / 15
Flavor   44.7 / 50
cocoa syrup, strong yet sweet, dilutes with starfruit (exceptional) -> the 2 conspire for fig & dark prune -> lightly salted almond enter, without ever losing all the precedes it -> reverts to solidly roasted cocoa-nut
Quality   17.1 / 20
Stands up very well as a straightforward chocolate. Terrifically gratifying cocoa backbone with but a gilded overlap of nuance.

Suspicions that Chapon's processing parameters shadow the handiwork of Pralus are quite logical (re: that robust roast) just as the FlavPro however shares more in common with Bonnat's Cuba (specifically the star fruits & the figs).

Cuban cacáo rarely disappoints & this bar is no different.