Impact
Some critics of the C-spot® accuse it of trafficking in sexual innuendo.

So when this, no, not Barbie doll, but Barba bar arrived ("Barba" meaning 'beard' in Spanish), well, the salacious connotations flew about so rampantly that no one needs to go there.

Besides, Mikkel Friis-Holm stands up quite the masculine kind of guy. Full-blooded Scandinavian; a beard in the original sense. Jesus wore one. Lincoln too. And Gandalf. Badasses all.

In other words, this can wear even a heavy-metal medal around its neck without hiding its true character: that secondary meaning of the term 'barba' -- 'whalebone'... beached & then crushed by its own weight without the buoyancy of water.
Appearance   4.4 / 5 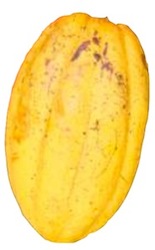 Barba doubles as an exotic trade-name for a "varietal" based largely on phenotype, or mere appearance. In this particular case, indistinct & problematic (perhaps even tainted sugar; RE: that bone char point).

Weak under-ferment. Was it micro-fermented in a shoebox without ever attaining the critical thermal mass? Reeks of sub-drying / storage issues too.

Manufactured by Bonnat as a private-label on behalf of Friis-Hoilm.