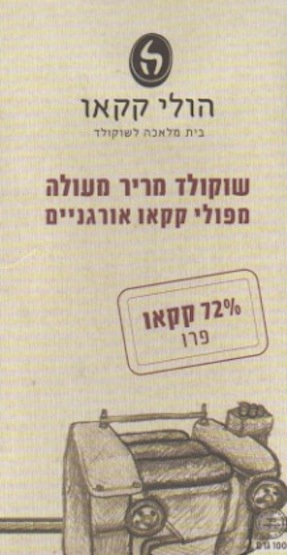 Impact
Judaism & chocolate go way back. That applies also to Judaism & just about everything for we live in a significantly Jewish world (& please, haters, no Elders of Zion comments).

From a Portuguese-Jew named Benjamin Andreade de Acosta, deported from Brazil in 1660 (for being, well, Jewish) but not before leaving with some cacáo seeds which he transplanted to the French-controlled island of Martinique in the Caribbean of an Amazonian varietal now known as ‘Martinique Creole’... & Shephardim roaming the Mediterranean as traveling salesmen going door-to-door grinding fresh chocolate... to the Pyrenees Basque region boasting a host of Jewish chocolatiers escaping the Spanish Inquisition & more recently the Mast Brothers helping fuel the new craft chocolate move in a partially Hassidim community of Brooklyn USA.

No surprise then that Jo Zander of Holy Cacáo in Israel would join in & bring, this, his benchmark bar to the party.
Appearance   4.2 / 5

Aroma   7 / 10
toasted grains, kernels, & nuts, including sweet kid cocoa + a remote fern & flower bed
very much the descendent of Holy Cacáo's Peru 100
Mouthfeel   12.3 / 15
Flavor   40.7 / 50
those ferns lead off along with bihao (a big-leaf plant used for wrapping tamales) & coconut palm hanging over cocoa & nuts for a black walnut brownie -> sugar in the guise of guaba (not guava but the edible white pulp surrounding a pit commonly referred to as 'ice cream bean', gleaned ever so briefly this bar's parent 100%) bleaches out the utter darkness without eliminating it -> some backdrop arrowroot soiled with Earthen elements -> white-pavement & a blacktop-thruway run on parallel tracks til merging at a rather bitter end
Quality   15 / 20
Another marvel from Holy Cacáo: contrastive simultaneity, especially toward the end, that rather black 'n white concourse of such hi-def resolution.