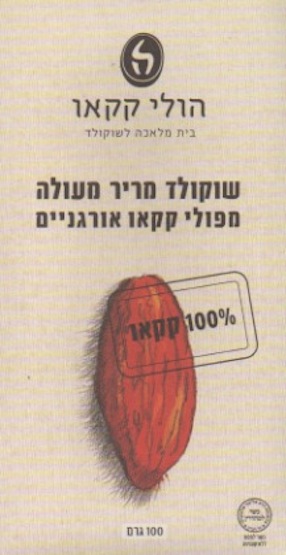 In an industry where 97%+ of the commodity meanders a long circuitous route from its point of origin, Jo Zander of Holy Cacao travels from Israel to Peru himself to procure these cocoa nuts that find their way into this bar.

No big brokers, major export agents, or third party traders. In fact, Jo purchased a plot of land there, planted 5 hectares of "naturales" & grafted another hectare with a new hybrid (ICT 1099 based on Contamana / Scavina rootstock out of the Tarapoto research center).

Beyond direct straight-from-the-source cacáo, Zander practically delivers an I-V drip of it.

Been awhile since any barsmith delivered such a ferocious bite. Probably need to cast back to Coppeneur's rottweiler of a bar from neighboring Ecuador.

WARNING: not for the faint-hearted. Experienced users only.

Funny, the bark (i.e., its Aroma) is almost puppy-like compared to the actual Flavor, the latter relatively un-ameliorated / un-manipulated.

Definitely a test of will & stamina. And yet it rings with honesty. The ferment rather correct; the drying free of molds & mildew; the processing, as noted, quite unadorned though Holy Cacao does smooth the edges -- somewhat -- to sharpen the teeth. It renders a sense both cultivated & non-domesticated, of hearth & forest. Which all let this cacáo off the leash in having its way around a public park where strollers, joggers & bystanders might be terrified but at least they'll get a taste of the wild without having to leave their "civilized" confines. Which means, should it be necessary, help is only a 9-1-1 call away.

Marañón + Piura
Geographic proximity (both Piura and Marañón in northern Peru) belies each other's organoleptic distance as these 2 cacáos are quite different.

Piura's lower base compounds pulls & pools Marañón's volatiles in a logical match, a good tight suture (though short of seamless), for a savory admixture. Damn savory... perhaps the savoriest of all 100s.