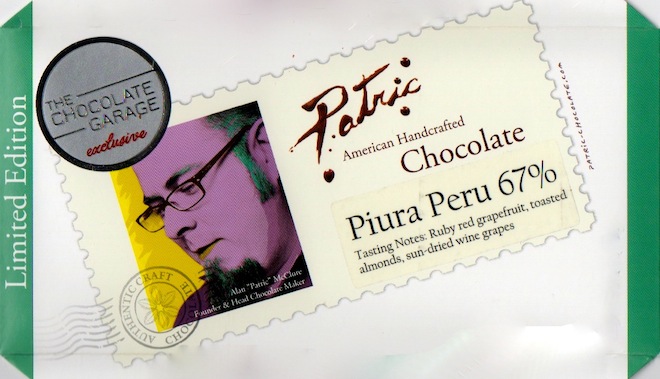 Impact
Oh, no, not another bar from Peru.

But oh, yes, another bar from Alan "Patric" McClure.

Which makes this more than just a bar. It means one whose every little wink charms with charisma.

"But what shall I say more of this excellent Nectar? It is a very good aliment, a clear Pabulum multi nutriment: that it doth fatten… is undeniable; and that it nouriseth… is without dispute… it revives the drooping spirits, and chears those that are ready to faint; expelling sorrow, trouble, care, and all perturbrations of the minde: it is an Ambrosia: And finally, in a word, it cannot be too much praised." -- THE AMERICAN PHYSITIAN; or, A TREATISE of the Roots, Plants, Trees, Shrubs, Fruit, Herbs, &c. Growing in the ENGLISH PLANTATIONS in AMERICA . Whereunto is added A DISCOURSE of the CACAO-NUT-TREE, And the use of its Fruit; with all the ways of making CHOCOLATE. The like never extant before. By William Hughes, 1672

As the southern extension of Ecuador's once-exclusive Nacional cacáo in Peru's northern hook, it draws parallels to the aforementioned Marañón, due east. Though generally nowhere as florid nor as genetically homogenous, Piura has plenty to recommend it.

On account of more arid conditions that often necessitate irrigation, Piura usually tastes less fruit-fresh & certainly less floral than Marañón's Fortunato No. 4. But barsmiths gravitate toward it anyways because of its wider availability &, next to another cocoa hub in Peru flooding the market -- San Martin (over run by CCN) -- it displays superior qualities.

Alan "Patric" McClure as of late has been catering to market demands, throwing the gallery some stuff with peanuts, mint, coffee & whatever else the masses swallow up. Don't let that fool anyone. He basically had to be dragged kicking & screaming into confections. Deep down he's a hardcore.

As always, Patric calibrates meticulously, respecting the cacáo, even if it entails a countertrend. For instance, McClure formulates, unafraid, a chocolate containing ⅓ sugar, a drop down from the 70%+ crowd, which stylistically places him in French madame grande dame territory (Valrhona, Cluizel, & the American descendent Guittard). Compounded no less by additional psychological sweetener in the form of cocoa butter (a virtual heresy to the New Cocoa Puritans). Pretty bold & brave of him.

Wise too, for those couple extra grams of sugar fuel this chocolate to fly its colors for the entire duration whereas other Piuras (not to mention most other origins) lapse & retire early.

This very bar steadfast in fact; seemingly engineered in waves. A streaming download of chocolate. Uninterrupted. The continuities -- phenomenal. No holes / gaps whatsoever in the sequence, just point-to-point flavor.

And yet it plays big 'n dark for a semisweet but with enough fruit loops to qualify as 'girly chocolate', err, to be PC binary in this gender-neutral climate, 'brony'.

Nothing about any specific facet stands out in & of itself as particularly remarkable. Each abounds in other bars found the world over. The totality however astonishes in its coherent & integrated complex. And the harmonization of it all just hums, easy as a sing-along. 'One' with U2 live.

The combination of seed, ferment-drying, roasting / refining all set in a seamless continuum that never stops until it completes its cycle from tree-buds to taste-buds. Naturally the feedback should enable Patric to turn what started out as cacáo leaves into some more green leaves of the paper currency known as U.S. dollars -- & maybe avoid that candy aisle the branding suits advise him to go down.

Beyond session chocolate, Patric's Piura rises to the level of high performance chocolate. Approaching the midpoint of 2013, this clearly a top contender for Bar-of-the-Year... so far.