Impact
Yet another San Martin... apparently a container shipment onboard an Atlantic Cocoa vessel arrived in ports-of-call recently.

In earlier bars from this locale, the discussion centered around St. Martin & its connection to the religious-jungle fervor created by Franciscan missionaries converting forest dwellers to Christianity & "civilization".

Before anyone gets the idea of the Mast Bros as Buston Keaton in The General, please understand that they act to liberate cacaoteros (growers) from poverty if not hardship. (Whatever the circumstances, raising cacáo is a break-backing bitch & one reason why gringos let others have at it.) Toss into the mix all the underhanded sleights, the gamesmanship, the trabajo de zapa (hidden work done slyly towards some particular aim) & these Mast'd superheroes are out to help save cacáo from itself as real-life Avengers.

Gen. San Martin led the Ejército de los Andes (Army of the Andes). A major feat in military annals, the crossing of the Andes proved extremely difficult for him & his men: it took 21 days due to low temperature & high altitudes. Later on, in 1821, San Martin's nationalist troops entered Lima -- the hub of the Spanish Empire in the Americas -- to little resistance, the city having by then been largely abandoned by the royalist forces. At that moment he become known as the El Protector del Perú (Protector of Peru). Before long, however, San Martin left the scene & departed from the continent altogether.

In this chocolate, the Mast Bros likewise protect then desert Peru by preserving the terroir inside this bar with tough love in abandoning all but the pretense of any craft.
Appearance   3.8 / 5 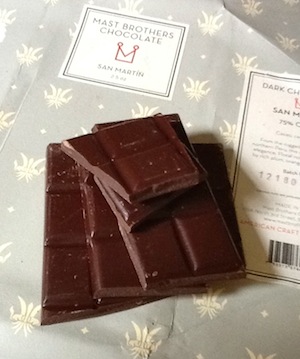 Aroma   7.6 / 10
hilarious: gotta go to Adi's in Fiji or Madre Hamakua (both of those in the Pacific btw) for such a draft of a beer hall in a choc bar... reeks unmistakable pale-ale (only noses working the all-night shift in a brewery & immune to that whiff could shut it out)... sopping / hopping fermentation, the stein just-drained / still-wet as the drunk stumbles to the dart board (a little cork in here), then heads for the urinal before lighting up outside (tobac) -> cinnamon fleck triggers some grape Bubble Yum®, then just rubber (dangerously close to a standing violation, or in parking code parlance, a '30-15' with enough outstanding citations to slap a metal boot on the tire) -> eventually grows wooden
Mouthfeel   10.2 / 15
Flavor   29.6 / 50
all that ferment tang in the Aroma translates into an electrifying fruit blast upfront (orange blossom, scraping plum skins, unripened apricot... the combined effect shifting to the very acidic camu-camu, guava & naranjilla) underscored in a wooded cocoa tannin -> soursop on cinchona tree bark (basically sap-over-resin) -> bleeds & oozes this way into a bitter pill to swallow (quinine derived from... yep, cinchona) -> maca & manioc -> astringent rinse at the finish (the fresh "mint" mouthwash promised in the liner notes on the wrapper?) -> mapati (Pourouma cecropiaefolia aka ‘Amazon Grape’) after-FXs with its winter-green clearing around that stringent grip
Quality   11 / 20
With the Masts, inconsistency remains the byword, their cherished method rising to the level of fashion statement, perhaps even an ethos.

Beyond the normal batch variability which rules craft chocolate, the Bros pride themselves for community development. So on any given day, at the controls might be a student intern, a fan, or a neighbor.

The result: spontaneous excitement, however erratic the output. Like this particular bar... a misfire; substandard all the way around.

Oy, where to begin:

1. Some probable CCN dogs in this mixed-mutt of a hybridized blend.

2. Little core chocolate flavor / base notes aggravated by a roast that accentuates the bitter stringency of this seed lot.

3. Excluding rare genetic exceptions, most "floral" vapors appearing in a chocolate are usually the imprint of short fermentation. They may sound & momentarily taste beautiful but gradually wreak havoc downline in the flavor progression. Mast San Martin could stand-in as the classic example. A ferment pile still on the alcohol & CO2 side of the equation rather than turning over into lactic / acetic acid.

4. Under-processing back at the Mast factory in B'lyn, NY, with a compatible short-conch compounds the woes -- part of the Bros' newer M.O. of just add sugar for a minimalist approach.

Where a similar tack more or less succeeds in the Mast's Chuao Suite -- a superior gene pool in Chuao can compensate for technical deficiencies -- this bar here suffers for it.

Mast's San Martin -- ill-defined flavor very much in keeping the new retro-American stylee: an old-school throwback to the late 20th century when Peruvian cacáo earned a reputation for being synonymous with 'sour dirt' which many of the good Bromans (growers) there in the last decade have toiled hard to overcome.