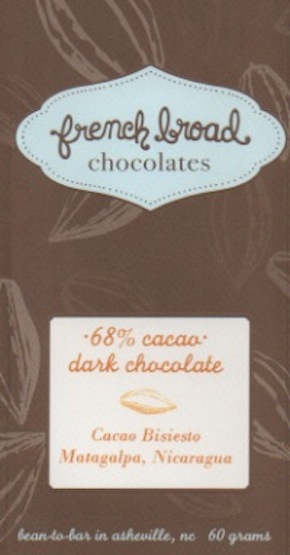 Impact
REDUX FLASHBACK REVIEW: The following review details 2 Cacao Bisiesto bars from French Broad, an early release in 2013, followed by another in 2016. Overall rating & metrics (upper right) reflect a composite average of both.

The Dog Ate My... The "dog ate it" excuse hasn't cut it in the classroom for awhile but the US Treasury is more receptive to this explanation than schoolteachers, & for that one person can be grateful.

A Montana man claims his one-eyed dog ate five $100 bills. The pet owner was nothing if not committed, following his dog around for days after the incident, collecting its droppings & eventually picking out the digested bill fragments before mailing them to Washington DC (how did they pass thru security?).

An unpleasant experience, his efforts ultimately paid off.

Treasury sent back a $500 check to replace them.

Maybe it’s part of the government’s “quantitative easing” policy, the monetary equivalent of a laxative befitting the tail.

Whatever, thankfully dogs are allergic to chocolate so this will never happen to chocophages.

A bar that carries the whiff of dogs & fleas but whose taste is anything “butt”.
Appearance   4.6 / 5

Aroma   7.1 / 10
2013
an animal shelter
wet dog lapping around a bowl of Alpo® (seriously)
for puppy wuvers, this got your name on it; those who suffer from pet allergies, stay away

A relative -- call it the sweet niece -- of Vintage Plantatation's La Tronca. Both hail from the same finca or grove in Nica, treated to a post harvest by CBN (Giff Laube & José Enrique Herrera's Cacao Bisiesto Nicaragua company), & possess animal instincts in their Aromas.

One therefore proves heuristic in approaching the other.

The extra 22% sugar here empowers, indeed emboldens, this bar with greater presence. Where some might expect a frothy saccharine exuberance, French Broad chisels away with sugar to draw out some seasoned lines (re: those spices glimpsed at in La Tronca). Not to be overlooked in the entire taste-matrix is, of course, the spice-princess of them all -- sugar itself -- which simultaneously doubles as a curb on that nearly-singeing roast whose heat transmutes a substantial amount of the core cocoa notes that characterize this cacáo.

As satisfying as the overall flavor is, it sits in a pretty planar geometry without much depth. Higher sugaring often creates a more 2-dimensional flav-scape. The tags orient nicely however, if on a more immediate surface level.

Add in the Texture & it all adds up to some fetching rusticity.

3 years on & this Cacao Bisiesto bar snagged a ribbon recently, emblematic of the upgrade in its overall quality., thanks largely to its fermentation, improvements in cleanliness & timing in the process as well as craft chocolate making.