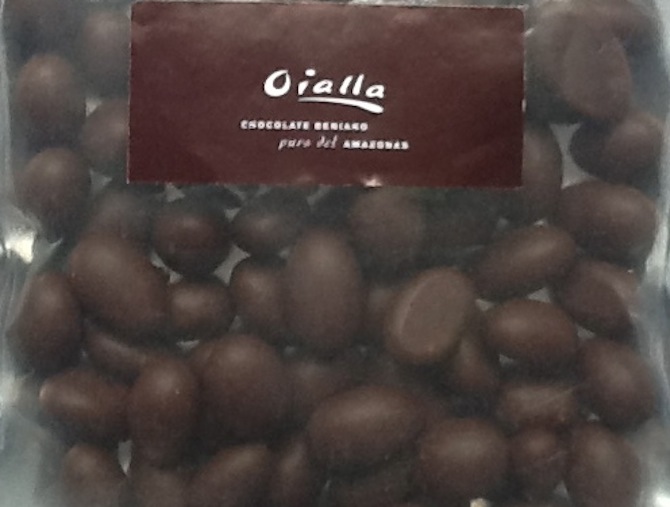 Impact
Confession: the C-spot® has a Snap fetish. It accounts for a disproportionate share of a bar or bean's overall rating (~1%!). A Snap often foretells the Texture because cocoa butter crystallization constitutes a major role in both. Now science comes to the rescue with a possible explanation for the Snap-Tease / Taste connection:

The tiny Gardiner's frog has no middle ear or eardrum & therefore, scientists assumed, no way to amplify & transmit sound waves to the inner ear, rendering it effectively deaf. But if this were the case, researchers wondered, why would these creatures make audible noises, &, for that matter, why would they respond to one another's calls? It turns out that these fingernail-sized amphibians use their mouths to amplify sound in much the same way that the body of a guitar does, & this sound is then conducted by tissue & bone to the inner ear.

These cocoa nuts also produce a deafening sound that translates to muting flavors. Nonetheless, they do get thru...
Appearance   4.6 / 5

Aroma   7.9 / 10
balsamic coffee tang nicely supported by cereal grains
raises up Bolivian fuchsia & pepper
Mouthfeel   11.3 / 15
Flavor   38.7 / 50
sugar plums, emphasis on sugar -> pectin -> light cocoa -> almond -> prune at the back followed by soft tannin
Quality   14.1 / 20
Most dragées / panned chocolates are beans of anything dipped in something. Usually of no pedigree for starters, then combined with cocoa from a completely separate origin.

Bojesen of Denmark corrects this with these. "Fungineering" at its purist / simplest: Beniano cocoa nut covered with Beniano chocolate.

A couple seasons ago, a label (which shall remain undisclosed) brandished a similar all-Beniano dragée that was so far from primetime it gave Bolivian cacáo a bad look. Burnt in the oven, they ended up in the Hall of Flames.

Well-roasted in the manner of this barsmith's 78% Oialla chocolate bar, these however exude a little too much charm to be tatty twee here. Overly-manipulated in favor of sweetness, to the detriment of the cocoa base which becomes muted because of it -- an indicator of just how benign & gentle this varietal given that added sugar comprises but a small fraction of total ingredients. (Or blame it on the audible Texture -- never a strong suit for this genotype -- which shuts down the tongue? Consider: why do so many people turn down the volume on the car audio system while searching for a street address.)

Notwithstanding the purple-fruited signature of Beniano, these make its famed flavor somewhat… well, anonymous.