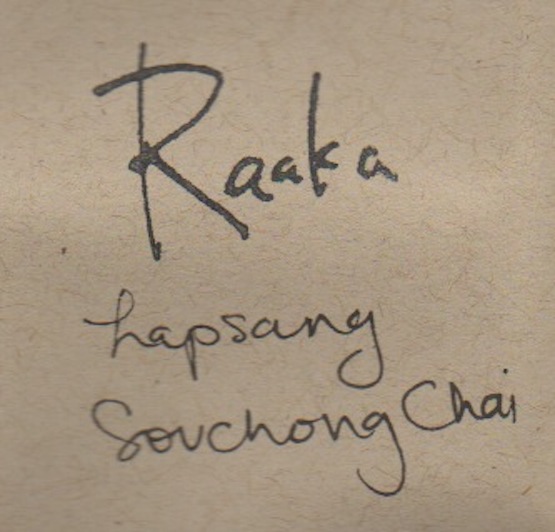 Impact
A dragon lap-dance on the tongue
Appearance   3.8 / 5

Aroma   6.2 / 10
fire-breathing dragon
thick tar & nicotine
pulled pork -- big ham right off the grill
gas fumes for a positively lit "raw bar"
Mouthfeel   12.7 / 15
Flavor   43.3 / 50
that dragon turns into Smokie the Panda Bear:
quick chocolate-plum point in a smoke chamber -> clears somewhat for tea leaves & mild spices to caress the sense organs -> hammed up chocolate hovers about with a li'l longan in the center -> skids off on some clean tar
Quality   16 / 20
A give-away tea, few Chinese sip Lapsang. Instead they dump it on the export market for gwai los.

Some feel the same about "raw chocolate" -- fodder for 'Merican guinea pigs.

Clever Raaka. Purveyors of virginal chocolate (re: "raw" / un-roasted), they slyly cook up the works with some tea smoked in the curing. Hence the relatively high roast metric (see upper right quadrant).

In the process it infuses the bar as if from Java or PNG (where cocoa typically carries a smoked character due to mechanically-dried nuts) & covers up flavor deficits inherent to underdeveloped "raw" chocolate.

A strong cup of tea that fortifies a willing & able cocoa, further bolstered by delicate spicing (the profile could benefit from increasing the "chai" herein, especially the coriander component).

Once more Raaka strikes for the unconventional & succeeds.