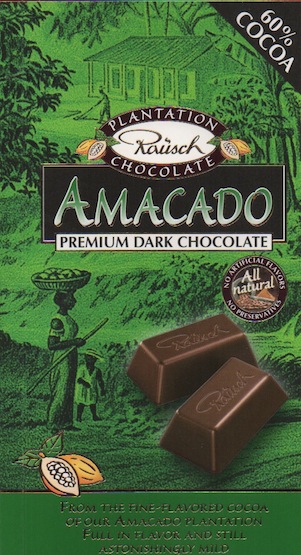 Impact
Cocaine smugglers have gone bananas. A "logistical error" resulted in boxes filled with bananas & cocaine being delivered to supermarkets in Germany.

What an unexpected surprise.

Yes, 140 kg of cocaine with an estimated black market value of 6 million euros were discovered shortly before the bananas went on sale to the public. Employees, in yet another surprise, called police.

This bar sourced in cocaine-rich Peru & manufactured in Germany also goes bananas on some refined white crystals. No need to dial 911 though -- it's just sugar cane.
Appearance   3.9 / 5

Be that as it may, this rather large company clearly appropriates if not confiscates the geist of kraftwerk-schokolade… to rather convincing effect, at least judging from the externalities (wrapper; appearance; et.al.). Interior contents however reveal the paw prints of an industrial giant trampling around the rainforest (lots of sugar, over-torching those burnt beans, plus enough added cocoa butter to soften the blow of any predator).

Raùsch tantalizes the buyers with script of "full bodied… & still astonishingly mild". Sugar & fat will do that.

A CBS (Cocoa mass / Butter / Sugar ratio) of ~2/5/4 translates to an obese-sweet in which core cocoa flavor gets bounced out to the edges. Thus attenuated, Raùsch decides to apply the heat to scorch the kernels in order for them to cut thru. It partially works.

At pennies per gram, Amacado 60% amounts to a sweet, cheap, & safe romp thru the "jungle".