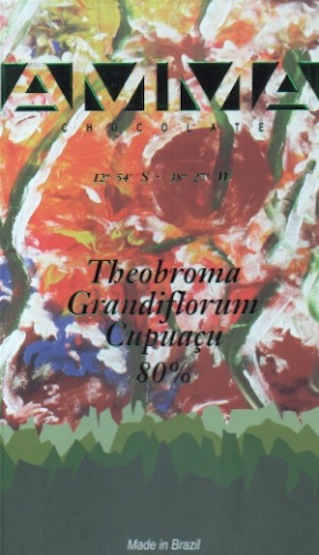 Impact
Chocolate craft begins with seeds (often dubbed “Jungle M&Ms”) from zeppelin-shaped fruits referred to as ‘pods’. They hang like so many colorful lanterns to lure pollinators & porters (midges, monkeys & man) on a tree whose species name is cacáo, one of 22 species or so (15 of which are edible with Bicolor and Angustiflorium the other relatively well-known / cultivated members) belonging to the genus Theobroma.

Another that belongs: Grandiflorum. It fruits to about the size of a cantaloupe &, like cacáo, contains seeds surrounded by a white sweet 'n sour pulp. This pulp attracts & is what popularizes capuaçu in juices, jams, pies & ice-creams, especially around Brazil.

Flavor will, to many, be underwhelming.

Weighted at 80% grandiflorum / 20% sugar indicates just how meek a species compared to cacáo whose compounds usually necessitate 30% or more sugaring. Much of that due to this Grandiflorum's obese lipid content measured in the CBS (Cocoa mass / Butter / Sugar ratio) of ~1:4:1. So much ultra lush butter should obviously make for great White Chocolate.

It also lends to an a unmoored trait lacking an anchor in the flavor profile, creating some gaps & vacancies which T. cacao's baseline cocoa compounds fulfills in chocolate.

More than a mere novelty however, Grandiflorum possesses real attractions on its own merit. Make no mistake though: its docile nature reinforces cacáo's place as the king of all Theobromas.