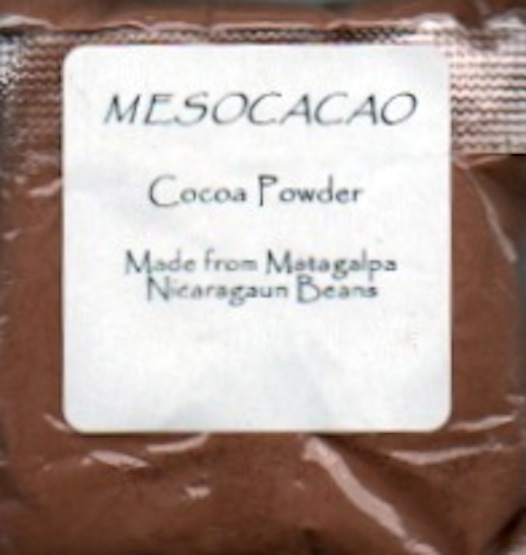 Impact
The late philosopher Frederick Sontag (Ph.D. Yale &, in the spirit of full disclosure, a professor & one-time landlord of this site's publisher) would gift copies of his book The Problem of Evil inscribed with a message, such as “For the C-spot – to join in the battle with the Devil”.

The linguistic ambiguity behind Sontag's statement is intentional, demanding the recipient to decide just whose side they're on.

Ditto this cocoa powder. It questions authority, & whether cacáo really is the food of the gods, or the devil.
Appearance   4.6 / 5

Out of step with the rest of Mesocacao's line / profile, even the Nibs, because it elects to defat this otherwise benign cocoa down to, apparently, the low teens. Lipids thus extracted leave behind a strident essence of Nicaraguan terrain -- right to the guts & bones.

Instead of mommy rubbing bad boy's mouth out with soap, this runs the tongue right over the dirt & into the soil. Kids with pica will like it.

Yet another demonstration of how fat has a direct effect on processing taste by activiating the cortical response area (somatosensory cortices + the anterior, mid & posterior insula) of the brain that controls taste, aroma, & reward which influences flavor perception.