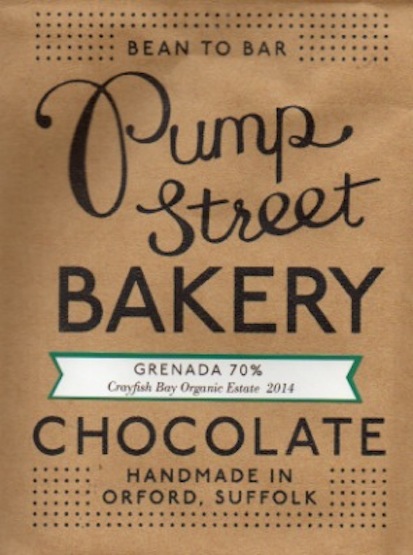 Impact
Grenada… a French colony, & then base for the British Royal Navy set in the Caribbean from which it gained independence 40 years ago in 1974.

Rebellions in the late 1700s on Grenada led slaves & their freed descendants to secure their own cacáo groves on the island. Upon harvest, much of it would be sent to the U.K.

By the mid-19th century, approximately half of all cocoa shipped to Britain ended up in the Royal Navy itself, enough to wonder whether sea men enlisted just for the chocolate. The high command even substituted it for butter & cheese on some voyages. For the average Brit, the only easier route to obtain chocolate entailed joining a monastery with the disadvantage, at least officially, of celibacy.

The English sometimes took their hot chocolate with a little brandy. This bar with an astringent back, almost rises to the level of a plum brandy, chocolate style.

Ex-pat Kim Russell tends to the 200 year-old, 15-acre estate re-christened Crayfish Bay in the upper NW quadrant of Grenada. On it he cultivates cacáo & treats its seeds to a fermentation-drying cycle of a couple weeks. The combination of some predigreed strains (offshoots of probable ancient trees) & favorable terra (lower elevation than most of the island's mountainous terrain) stand out from neighbors that make up the bulk of Grenada's supply.

From there another Brit, Chris Brennan of Pump Street Bakery, directly sources the cocoa crafted into this chocolate.

Along with the commonplace blackstrap tones of this former molasses plantation when during French rule it was named Nonpareil (which can practically still be tasted in this bar), together Crayfish & Pump Street script a fruitful chocolate.

The results here somewhat monotone… but what a tone -- prune / plum. Indeed almost everything in its path & wake gets subsumed under those plums, including Grenada's signature dark chocolate lava flow. Quite channeled, very little volcanic dust-up so common to the island, though noticeable molasses streams forth by the mid-palate.

A Grenada that generates a certain yearning the longer it continues, in a classic example of a chocolate that grows on you the further the melt-thru.