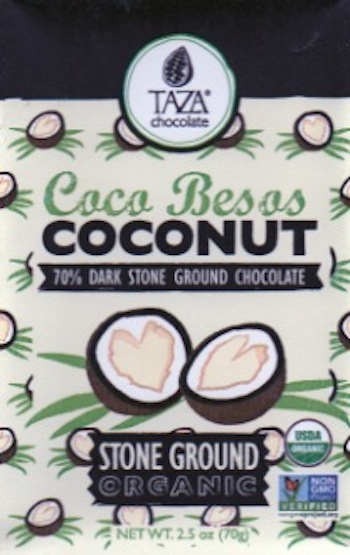 Impact
In 1759 The Boston Weekly published a list of goods that go along with chocolate: raisins, currants, sugar, spices &, of all things, cheese. Yes, the American colonists were way ahead of latter day foodies who deceive themselves about staking out "new" fertile territory & flavor "innovation".

One item left off the list then & often now: coconut. A natural combo since both are nuts (well, homonyms really for while cocoa's technically a nut, coconut in a case of identity theft is actually a drupe) .

And what about raspberry? See below for how that relates...
Appearance   3.7 / 5

Aroma   8.1 / 10
an inexplicable raspberry-jellybean shock
coconut / cacáo nut
musty cabinet
Mouthfeel   12.4 / 15
Flavor   44.6 / 50
raspberry all over it -> coconut undersiding -> golden roasted cashew
Quality   15.9 / 20
Bombone-like with raspberry starring as the possible mystery ingredient, the chocolate base a lonely bystander if not M.I.A.

Either Taza mislabeled the wrapper or cross-leakage occurred between this & a prior batch.

While a raspberry accent infrequently characterizes cacáo from The D.R. (though nothing of the sort gleaned in Taza's straight unflavored 80% from there which furnishes the couverture here), the exaggerated magnitude of it signals an unlisted fruit additive. And sho'nuff, Taza manufactures a Raspberry Nib Crunch in this its "Amaze Series" of bars. Clean the tanks, gang… even if the overall effect rises to the level of satisfaction.

(The only other unlikely explanation would be the synergism of all components combined.)

Whatever the circumstance, the berry so dominant as such it robs this bar of subtlety, as well as complexity.

One of Taza's more refined chocolates nonetheless -- both in Flavor & a relatively integrated Texture (excluding the shredded coconut). Consider it unprofessionally but happily contaminated.