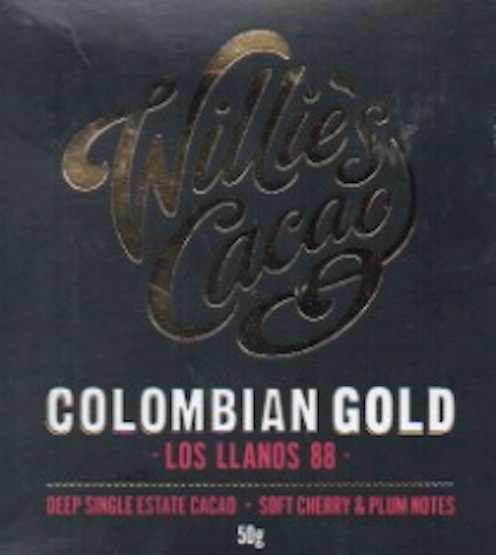 Impact
Despite its diminutive size, the Golden Poison Frog is one of the deadliest creatures on Earth. Native to Colombia, it’s not venomous -- for the delivery system is other than via fangs – but poisonous. More specifically, a skin densely coated in alkaloids, including the rare neurotoxin batrachotoxin which tastes vile to predators & prevents nerve signaling from transmitting impulses, leaving muscles in an inactive state of contraction. This can lead to heart failure. One Golden Poison Frog contains enough to kill 10 humans.

Amerinds swipe the substance on the tips of poison darts & arrows.

Interestingly, the frogs don’t produce the toxin themselves, & it remains unclear exactly how they acquire it.

Lest anyone think the Golden Poison Frog obtains it from chocolate, such as bitter 88% cacáo-content, Willie produces this antidote to that misconception.
Appearance   4.2 / 5

Aroma   7.8 / 10
rather Venzy… a wooden nuthouse, as if relocated from there, built on a foundation of bluestone
Mouthfeel   11.6 / 15
Flavor   44.3 / 50
lite spice -> generic coffee -> dry wood -> meaty nuts -> intriguing bitter recess vis-a-vis banana back -> cherry pit
Quality   16.1 / 20
Liner notes proclaim 'soft cherry & plum' which largely misstates it. Generally low acidity render those hard to fathom, as hard as the Mouthfeel on this.

Texture & Flavor verge on 100% unsweetened except the modest 12% sugaring furnishes a respite, even a refuge, from the cuffed bitters that lurk throughout, mainly in the backdrop. Ditto the added cocoa butter which Willie uses assiduously as an emollient. Indeed this rests equipoised on that fulcrum between chocolate liquor & chocolate bar.

For 88%, a highly accessible profile, replete with internalized benevolence.