Impact
Few barsmiths produce unsweetened 100% cacáo-content chocolate. And those that attempt it almost always stick exclusively to the Dark-Brut category. In other words, an extreme dark brown bar.

Practically no one does the reverse in producing The recto-100: an unsweetened White. Strange because White comprises the butter coming from the same cacáo seed that makes the darkest chocolate. They’re dimorphic twins. Yet so little of it exists.

Only 2 on record -- Adi's Koko Bata out of Fiji since 2009 & now Conacado, an organic cacáo co-op from The D.R. The difference between these two island butters is not quite night & day but they are a half a world away on opposite sides of the planet.

Cacáo butter can similarly vary in texture & quality depending on geography, variety & weather just like a single-origin / single-strain Dark Chocolate. The more prized seeds grown in the northern stretches of South America tend to have softer butter compared to bulk grade cacáo from Africa. A strong QTL (Quantitative Trait Locus) or genetic cluster with a particular characteristic for cocoa butter hardness has been identified in lipids with a higher melting point (specifically LG7 & LG9). Climate temperature also affects chemical & physical characteristics of cocoa butter, both in terms of the percentage of fatty acids & their melting point. For instance, some Central American harvests in 2011 reported a few cacáo seed lots bearing 60%+ butter content. The average daily temperature during the last few months of pod development apparently affect the characteristics of cocoa butter as much as any other factor. Lower temperatures give softer butters with a lower melting point.

Most seeds contain approximately 53% butter-fat. Nonetheless, whatever the exact percentage, fat represents over half of the dry weight & the most important nutrient of the seed, vital for its food storage.

Cacáo butter is the goddess of vegetable fats. This Conacado embodies the divinity of it. 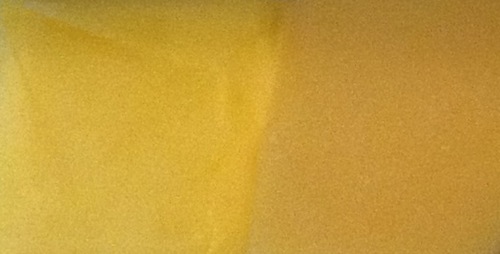 Battle of the Butters: side-by-side which is which... tell the difference between the cow & cacáo

Whereas Original Beans prides itself on a confected white chocolate christened Edel Weiss (40% cocoa-butter content; milk; sugar; et.al.) for its neutered if non-deodorized flavor which doesn't interfere but risks the danger that it gets so far out of the way to be a no-show (re: vritually undetectable), this White, without the whole exogenous kit (no vanilla, no milk, no sugar… nothing but butter) achieves just the opposite: unavoidable presence.

Easy to understand why one cacáotero / Broman / grower explains that at his family table they use it like… well, like butter (instead of dairy butter).

Conacado holds a decisive advantage in a) cultivating cacáo & b) operating on the island of The D.R. which boasts tremendous cacáo diversity. The co-op has the pick-of-the-crop, affording the option to select the most replete types for butter quality.

They press it well after roasting warmly. Scant trace of impurities or machine oil. A check of the technical specs: