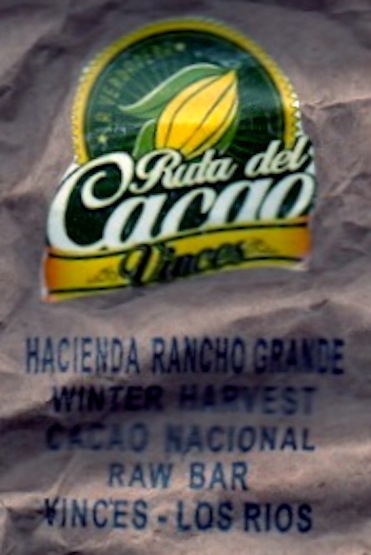 Quite a ripe winter harvest from Hacienda Rancho Grande. Just imagine what Spring shall bring.

The following details a Chocolate Bar Blitz – in this case 7 reviews in 1. the C-spot®still maintains its actual sampling policy of only ‘1-a-Day’ in order to obtain an accurate & thorough gauge on a chocolate; as well as to avoid inevitable palate fatigue which occurs with multi-samples in a compressed time session (no matter what so-called miracle palate cleanser may be invoked). For the sake of publishing efficiency, they’re consolidated into this single review. The overall rating & metrics (upper right) reflect a composite average of each bar's individual measures.
Appearance   4.3 / 5

100% -- the 3 iterations submitted of this percentage varied wildly from:
a) caraway -> coffee -> black walnut shell -> cocoa-woods at the corners
b) mulch-funk to parmesan & yeast (attributable to a mere 6 hours of refining)
c) huge blackberry Bubble Yum® with a Texture to match, incredibly sweet, onto a long drawing of mild basal cocoa & a late-closing gardenia; positively uncanny for an "unsweetened"
obviously the last -- 'C' -- stands out the most / the best

79% 16h -- the first sample in this series with sugar; juicy blackberry front lip, followed by some of the yeast in the 100%-b) bar but sublimated in this to marigold / hops quotient -> lightly malted walnut

79% 20h -- as the name denotes, 4 hours of refinement differentiates this bar from the one just above; the tags so much better defined, less because of any overall increase in magnitude & more due to increased contrast between the fruit highlights & the now pronounced chocolate-quotient backdrop, as well as curbed stringency

72% 20h -- four additional hours of conching smooths the cloying edge of the 72% 16h (above) & mellows the profile down, boiling it so to speak toward a sap / dried fruit reduction devoid of almost anything but sweetness

70% -- coffee-driven air
automatic / instant blackberry juice before a whole berry apparition, all of it underscored in a respectable 'black chocolate' sub current
the virtues in this bar highlighted by the fact that, unlike the 72%s (above), it contains no added cocoa butter to impede the expression despite a mere 15-hour conch job… only at the final tail appears a yeasty tell; excellent & other than the 100(c) (also above), perhaps the standard bearer of the collection
Quality   15.2 / 20
Rancho Grande constituted a large hacienda some 100 years ago but then agrarian reform throughout the 1960s-1970s split it into smaller parcels, many which left cacáo planting altogether. Today it encompasses around 40 hectares supporting Cacao Nacional, including a old-growth trees. Harvests end up mainly in Switzerland because of family ties there.

One of the best 100% chocolates in production… if truly unsweetened. The rest expresses classic regional Vinces flavor, much of it crafted by ex-Coppeneur exec & Der Schokoladentester author Georg Bernardini. All with just cacáo seeds & cane sugar; some, as noted, with added cocoa butter; none with vanilla.