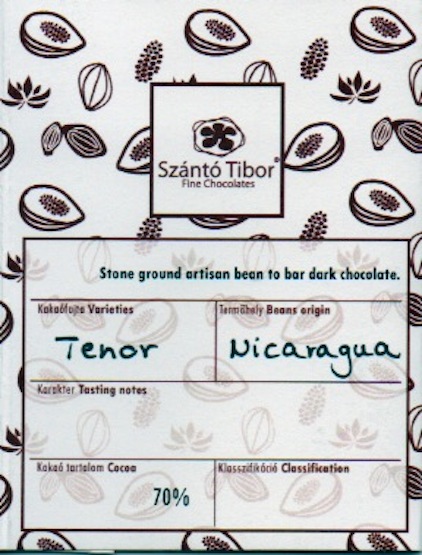 According to one study, trace amounts of it can be found on 4 out of every 5 dollar bills in circulation – the world’s reserve currency. However, the fine powder easily spreads so presence of the drug does not necessarily correlate to the money being used for snorting.

These bars ain’t quite that but crude estimates run that 4 out of every 5 fingers will have some of it on them... due to their construction if nothing else.

Taste more Mexican than Nicaraguan & far from Szántó Tibor's initial Chuno, that one the Blanco

A unique & vibrant interpretation of this varietal

Rugoso
easily the most potent updraft on the inhalation of the entire collection & the tongue holds as much… a stronger version of the others -- cacáo verde -> pitaya marmalade lays it on heavy;
other than fortitude, however, it hardly stands out from the rest in contrast to elsewhere that shows this varietal a cut above

Tenor
more a tradename / brand-name of a regional type than any genotype, Tenor™ hails fromLa Dalia, Matagalpa, sampled prior in Mesocacao & others
the more unique scent in the set -- spice… oxidizes very clean, watery, even melonic
another sweet jam rages in & on its heels some more green-action cocoa -> rear herbal FXs (medicinal in nature)
Quality   16 / 20
A horizontal flight across a particular region, in a single country, covering 5 cultivars.

Szántó Tibor basically runs the table of the Ingemann cacáo catalog, a mix of hybrids rooted in Amelonado, a cluster of clones originally discussed in-depth at the end of the review for Friis-Holm's Ruguso.

All of them presented here on the raw edge largely owing to the crafting of these bars (very light processing… roasting / refining) & not a reflection per se of the cocoa harvested at source. As such, the handling squeezes their flavor profiles into a narrow gauge than would be otherwise in further underscoring their very common ancestry. Quite top-heavy & asymmetrical. Still good, just underdeveloped.

Instead Szántó Tibor brands its maker's mark on each & every one at the expense of their respective individual character. Stunning, however, how much flavor still expresses given the processing parameters.