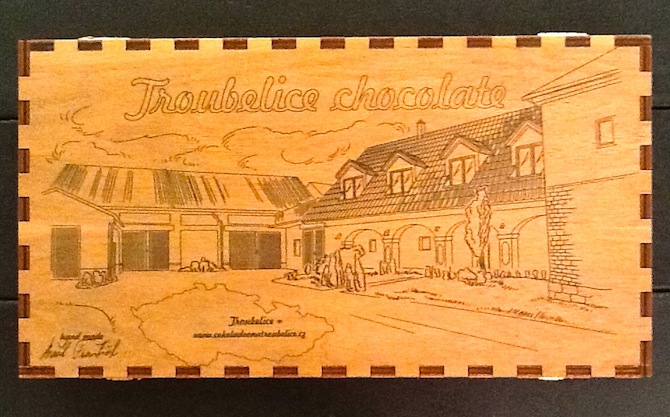 Impact
A vertical taste-flight all the way from the pod seed to the pressed oil
Appearance   4.8 / 5

Bílá
40% cacáo-content (as cocoa butter)
murky lake bottom of soft sediment & algae -> salted butter rescues would-be drowning victim but more chlorophyll hangs around as seaweed wraps the tongue -> late split pea soup -> sweet vegetal after-action
Curious pair: cocoa butter & spirulina. The latter provides both the gagging to the progression as well as the high point since it contains enough sodium to produce that umami moment. Before & after then, however, it hardly provides good taste. Gotta luv the cartoon slime-green color though.
Quality   15.1 / 20
Troubelice becomes the 2nd Czech barsmith after Jordi's to enter The Chocolate Census. Its profiles, excluding Bílá, appeal to a more conventional sense of chocolate which should win it adherents from all over.