Not many Haitians own cars: less than 5 out of 1,000. Nothing bad in & of itself since autos contribute to all sorts of ecological ills. The situation of getting around the island is compounded by the fact that no railroad exists either. Lyfte® where art thou? Well, in the cities, people often take pre-Uber communal taxis & colorful public buses called "taptaps."

These 5 distinct barsmiths from 3 different continents all demonstrate that Haiti, & a widening part of the world, are tapping into the country's cacáo groves driven by increased demand for wild & exotic chocolate. While the results here are neither, they point to a country headed in the right direction.

Clustering a handful of bars crafted by various barsmiths, each utilizing cacáo from a single-origin, represents a, ahem, departure of sorts for the C-spot® in terms of a review format.

a) smoked coconut over the dying embers of a tire bonfire (Hévin and Saegusa -- see Flavor section below) -- modified somewhat by A. Morin's chocolate inkwell + a newfangled tag: tar-anise

More bar shock from the label that released a shocking Vietnam. Shunsuke Saegusa favors higher sugar counts & this prone cocoa really benefits from it. A chocolate that overcomes serious deficiencies early on, finds its better nature, & sticks it.

Single-origins can be intimidating to some, adding a complication to what most think of as mere candy. Flavor-wise, here's one for the masses.

Vanilla Beans / Chocolate Design Company
Hait 68%
A 2nd Japanese maker working with Haitian cacáo. Alone amongst all the barsmiths here, this one utilizes agave along with cane sugar which imparts a cooling metallic streak to an otherwise candied / caramelized brown syrup demeanor. Additionally, the company fattens up the lipids beyond cocoa butter with differing plant oils. All in a sign of just how impoverished these seeds must've been because very little base cocoa impressions survive except for a dirty bog of an ending.

No déjà voodoo here. The cleanest / clearest of the bunch so far, missing the miasma of the others above.
A Francophile former colony, obviously a French connection exists between the island & Baigorri, France where Laia toils.
Marvelous, all things considered. Yet another barsmith sneaking up on the lead-pack.

Really up-roasted.
Morin, always quite intentional, probably concluded that these seeds required some high torrefaction to either braze off the deficiencies noted in a couple bars above &/or scorch this into a delimited profile free of subtlety. And certainly none here. To their credit, they take the heat well.
A straightforward Dark that inclines about 5% darker than listed.

Taza
The ever-conscientious friends-of-cacáo at Taza sent the whole barrel from 'bean-to-bar'… that is, seed-to-chocolate.
In the process, they upped their game in just about every aspect: the DirecTrade sourcing, the hi-quality paper stock wrapper in saturated colors -- damn, that alone makes this worth about half the cost -- not to mention the chocolate itself. 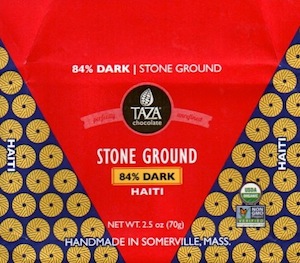 Seeds of Pisa
Produits Des Iles SA (PISA)
Pulled from a small growers network organized into an association called APROCANO (Association of Cocoa Producers from the North).The network counts 30 local groups so far representing some 1,500 members, each tending to certified organic cocoa on plots that average less than an hectare. These properties practice poly-crop 'Creole Gardening' along the island's north coast around Cap-Haitien. Another local organization -- PISA -- handles post-harvesting at a central facility, treating the produce to ~6 days fermentation in pine boxes, then solar-drying tunnels on raised wooden beds sheathed in plastic mesh.

All-in-all, a very clean if narrow & curtailed range accompanies some round bodied texture.

The most unique offering among the line-up: a) the hallmark coarse grind / texture of Taza (none of the whizbang refinery); b) the highest percentage cacáo-content of the group &, despite these 2 factors, c) the greatest fruit-laden upper-barrel nature of flavor. Uncanny. Doubly so considering that the Seeds of Pisa themselves (above) hardly evince such hints which follow-on in this bar. Make that triple taking into account the scent which conjures up a soiled-cocoa mud cake with a crust of funk / ink.
Taken altogether, a cacáo / cocoa of tough naturalism reformed into loose chocolate by a certain structural elegance.
Taza is getting to know this seed type intimately; in fact, the liner notes are uncharacteristically accurate for a niche that often spits out clueless taste-tags or, worse, misleading propaganda.
Arguably the label's most substantial bar all the way around to date: from its sourcing relationship at the origination point to the end flavor.

TAZA 84% DARK-HAITI WILL BE AVAILABLE COMMERCIALLY STARTING IN EARLY 2016
Quality   15.8 / 20
Haitian cacáo, long the poor orphan of Hispaniola, & disowned by many as nowhere near the gastronomic panoply of its next door neighbor Dominican Republic, currently undergoes a bit of a renaissance in the wake of all the post-disaster relief funds flooding over the island.

Its cocoa remains constrained both by comparison & on the merits but a couple outliers -- Laia and Taza -- promise a greater array of flavor to come in the years ahead as the nation, still beset with problems, advances from a basket case to hopefully one that utilizes & just as importantly optimizes the available resources.

For in Robillard, a tiny hamlet deep in the Haitian hinterland, Valmir Mamonvil points to a would-be national hero: Maman Pye cacáo, which in Haitian Creole means "mother cacáo tree." His father planted it 30 years ago & for Mamonvil the tree stands for more than a family heirloom. It could be his kids' ticket to prosperity — & this country's chance to cash in on surging chocolate demand around the world.

Their prospects reverberate far beyond the island itself. If poor, humble, beaten-down Haiti can achieve such, then so too just about everywhere / anywhere else. 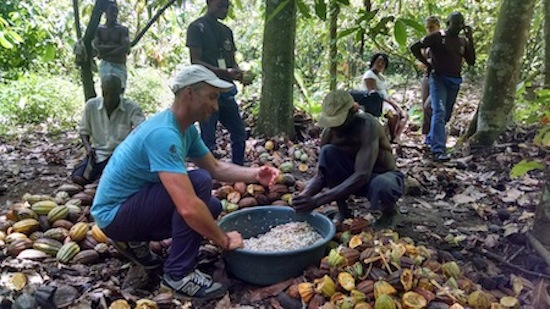 Hands On: Taza Chairman Sir Alex Whitmore, beknighted here for his seasonal exploits in the growing fields, hacks the cacáo code by splitting open & scooping out the pods along with the local crew from PISA.