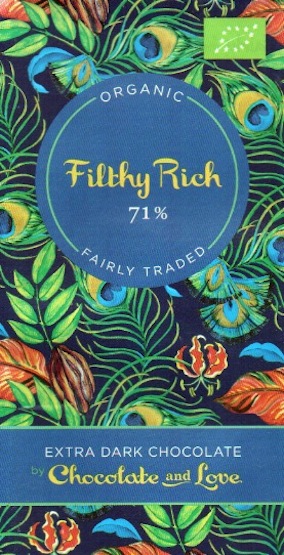 Impact
Chocolate and Love out of the UK conjures up the stuff of romance fantasies with this 2-bar set starring the Filthy Rich vacationing in Panama. Which reads like reality TV now that the entire global economy caters to the 1%.

Which makes the 99% out to be Bampfylde Moore Carew, aka 'King of the Beggars', an English rogue & vagabond who became a folk hero after that eponymous book published in 1745. It portrays him as a roaming trickster who lived off the money he made deceiving the wealthy.

So for chocolate, dirt fucking poor campesinos may continue to break their humps picking & splitting cacáo pods to feed the fancies of the ultra-wealthy (thanks much). All in asserting certain inalienable rights like life, liberty & the pursuit of happiness now that the American dream has gone global.

Yes, chocolate, love, & happiness. Nice that this company inserts the conjunction 'and' instead of just 'chocolate-love' or 'love-chocolate'. Too often cocoa gurus & groupies confuse one for the other. As though chocolate were an adequate surrogate for true love -- lost or otherwise, a stopgap to fill a lonely void, a memoir for an adulthood of indulgence if not addiction.

This causes OCD (Obsessive Chocolate Disorder), ingesting S.O.S. (Same Old Same) single-origins (especially Ecuador & Madagascar) again & again that should cure, one would think, ADHT but the natural stimulant theobromine contained in chocolate prevents it, triggering increased beta waves in the brain, the ensuing anxiety then leads to incessant bar hopping – from one to the next, then back & forth… repeat cycle.

In exchange, consumers receive in every bar, to paraphrase Thomas Carlyle, the life of chocolate, especially the spirit of its terrestrial existence, its outward environment, as well as its inward principle; how & what it once was -- bestial & earthly in its jungle cradle; whence it proceeded into the rhythm of centuries... tending nature's own artist rendering a seemingly safe, seductive resemblance of that phenomenon while deceptively devoured by it rather than vice-versa.

As the universe hurtles toward AI & hyper-simulation, these 2 bars from this English label are in truth quite insular as a cat in Windsor Castle -- an official principal residence of British monarchs since the 11th century. The Queen herself is said to be quite fond of Windsor & frequently weekends there among its 1,000 rooms within 13 landscaped acres. It holds the distinction of being the oldest & largest occupied castle in the world.

That's a lot of castle for one lady. She's accustomed to it though. For the rest, mere subjects, consider these bars like it: uncomfortably comfortable.
Appearance   4.4 / 5

Tame 80%, bordering generic…. buttered-up & vanilla-ized for no bite marks.
Like vanilla? Then get this.

similar vanilla entrance with added tannic power &, moreover, shifts in hyper-pronounced Aromatics including a succulent sweet spot (vibrant moraberry & huckleberry) surrounded by them (superb)… hangs out for the longest until enjoined by a walnut brownie fade -> late-breaking ginger-coffee! -> just a puckering touch at the very last

'Filthy Rich' indeed. Only the taste-blind could miss it.
Acidity nicely cuffed in body & baser / heavier molecular weight compounds that together form a fruited chocolate penumbra of phenomenal length / stamina.
On its own, apart from Panama (above), this bar earns a solid gold rating.
Quality   15.8 / 20
A brand that puts the love in chocolate (now bad boys, no filthy minds here).

Situates right at the crossroads of artisanal & mainstream.