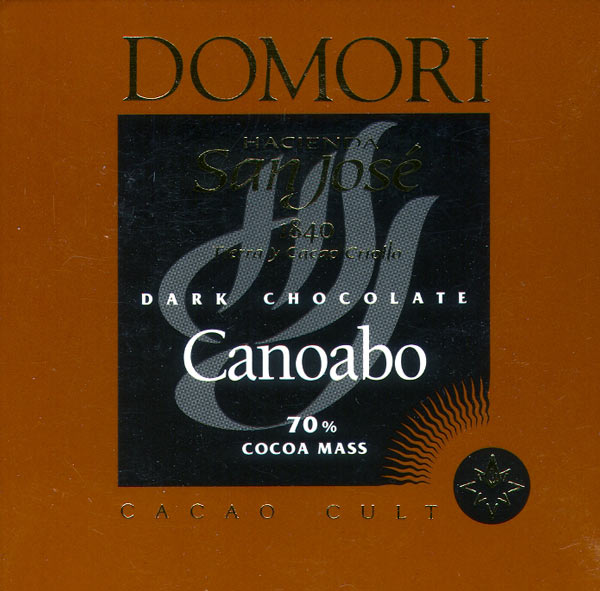 Impact
Soft-power/big pimpin’ Mack Domori style. Temporarily yours, then leaves you like an escort in the middle of the night in awe, figuring that 'that’s some hell of a business: you got it, you sell it, & you still got it’.

The diva bean with her eons of breeding, cultivation & domestication still wild & free, finds her john in the Domori alchemists. A great thoroughbred spirit, par excellence, with an ego to suit… single-plantation Criollos.

Just because a bar-smith can afford the bean does not mean they’ve earned the right to work it (dare name names?). Like Aretha said: r-e-s-p-e-c-t… the name of the Domori game talking Albus Dumbledore’s hand in this magical head-splitting orgasm of a 70%.

Nothing else to say but this the template the Cacáo Gods had in mind when they conceived El Empress Criollo.

Put a bullet in the brain ‘cause this chocolate bitch turns it out.
Appearance   4.8 / 5
Textbook; every feature dead-on
Aroma   9.1 / 10
1st air - roasted almonds & hickory, next toasted bread crumbs & loam, then wild herbs cut-thru (sorrel & clary sage) for indoor / outdoor contrast; aerates to cocoa-dusted roses, mink-musk & tobacco
Mouthfeel   13.8 / 15
Flavor   46.1 / 50
drops-in a very cool sensation... the aromatic herbs + mint -> almond cream... tone & color darkens up w/ a controlled but assertive fruit-front (from Turkish apricot, royal black mulberry, & bahri dates... each flavor pitched perfectly layered/separated), forming a base-jumping wall to head-on chocolate -> free falls into foaming cocoa mass laced in zinc -> Châteauneuf-du-Pape scale tannins to finish... 20 minutes later scent still lingers in the upper sinus & back throat
Quality   18.9 / 20
Balanced ferment, perhaps a degree more roasted than typical Domori Criollos, then conched to finesse. Liner notes pretty well cover it, another sign Domori thoroughly understands his through-put from start (he has been in on the Canoabo strain since its conception in 2000) to finish. A creolized Criollo (recently grafted sub-clone), this along with Ocumare 61 (Puertomar) & Ocumare 67 (Puertofino) forms the 3rd vertex to his genetically-engineered trinity at Hacienda San José, the estate in which he has / had a stake.

Seems less manipulated than the other 2 (their splices can virtually be tasted) & sweeter than 70%. Added bonus: lots of CQ in & around the accents + cat-like grace & fluid movements. Cool as Seth Morrison with his aerial dismounts on skis.

Whereas with earlier releases of this bar, it fell into a vacuum after hitting the chocolate wall, descending toward sunflower seeds for a powdered mocha splash landing (overall mild with paradoxically patient if short-lived evolution), felt a little vacant by the end – then a window on the virtues & limits of modern cacáo labs which allow for varietal preservation / regeneration but often at a loss of some sensory properties – the science now catches fire.