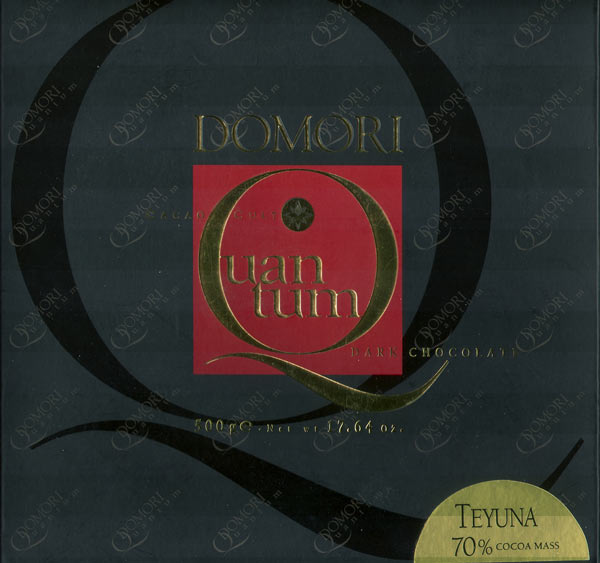 According to Sun Tzu "life is war" & civilization turns warriors into sheeple. Teyuna (named after the lost city; believed to mean "sons of the tiger") has a war-like disquietude: on the battlefield of chocolate combat, this bar is its own worst enemy, incapable of conquering itself. Ultimately it prevails, however, because it inverts the senses in the same way as witnessing violence & being horrified... by how much you like it... & like the uric acid pissed out of this tiger's penis.
Appearance   3.8 / 5
haphazardly beautiful
Aroma   8.3 / 10
clears the atmosphere & surrounding area: primordial... overall dark tone; very forested (exotic woods), cut by marshes & acidic bogs; mild nut milk the lone familiar scent to hold onto
Mouthfeel   12.1 / 15
Flavor   37.4 / 50
glorious, if all too brief, opening: drop of mother's milk for a Milk Chocolate moment in the spotlight -> currant flows redder to tamarillo then strawberry -> peaks on rose & a rapid inflorescence of malanga -> cashew & brazil nut mix up the batch into chicle (or chic-lets - chewing gum from the natural rubber plant) -> abrupt pivot, as an overhanging acid forms a cloud forest (guava, granadilla, & curuba [RE: banana/passion-fruit]) negating a lot of preceding flavor underneath -> bitter wood / taproot arracacha (starch) pops thru like a vampire meeting a pre-historic sunrise w/ beams of dim honey lifted from the tombs for millennia -> all that vaporous acidity distills into rum that rubs alcohol across the palate
Quality   15.2 / 20
Shades of S-Bs Cuyagua without the restraint - believe it or not. Even more reminiscent of Askinosie's Soconusco (since research continues to discover a possible pre-Columbian connection between Santa Marta & Mexico, maybe there's more to the story). The link here? A dirty hybrid; starts with true heirloom Crioillo taste that degenerates into latter day flavors (raw 'apio criollo' - celery creole), for an unnatural 'blend' suiting itself poorly. Domori could've done more to mollify acidity but he undoubtedly realizes that would just wipe-out the final vestiges of any Criollo in the flavor matrix.