Impact
Shakespeare: be not afraid of greatness: some are born that way, some achieve it, others have it thrust upon them. In the folio printed posthumously by his fellow actors, they requested everyone to read him, then implored ‘read him again’.

The area of Chuao represents the Romanee-Conti of chocolate, an “important cacáo” with huge symbolic, cultural, & ‘social capital’, to borrow French thinker Pierre Bourdieu’s concept. Bonnat’s Chuao, simply put, is afraid... of the inevitable comparisons (considering how inextricably linked they are by name & source) to its undeniably great Amedei relative. So it goes out of its way to ensure sibling rivalry différance. The shame is, like Terry Malloy On the Waterfront, Bonnat’s coulda been a contender & woulda been something except maybe the fix is in, & Amedei plays the role of Johnny Friendly (for more, see Quality below). Ultimately a very black affair without bowtie, which marks another kind of occasion – a solemn one.
Appearance   5 / 5

Aroma   8.9 / 10
gi-mongous feral strength: 1st draw - molasses, coconut cream, plantain; flag banner of fermented berry tang up top - black & blue & red galore (huckleberry / boysenberry); roasted smoke &, being Bonnat, throw in some husk & bark & wood chip + leather shop tannins creating a brown undertow of burnt caramel from royal mulberry & Thai tamarindi; all very evenly stratified
Mouthfeel   11 / 15
Flavor   42.1 / 50
pure chocolarity -> rising bitter replaced by buttered pecan -> idles... mostly M.I.A. / relatively inactive... while melt holds up what eventually becomes molasses backdrop for remainder of length -> indefinite fruit(s) to the fore, lacking any charm or character promised in aroma... wedged by twin forces: a heavy roast & the French contagion (big butter making for a latent, even dormant, bar) -> evolution & structure collapses onto simple treacle -> fades tobacco leather Dorian Gray -> final cream-out
Quality   17 / 20
If it looks like Chuao, smells like Chuao, & tastes (sort of) like Chuao, well.... you know the rest. What about the reputed monopoly on Chuao; that a single family syndicate controls it? Anybody who’s been to the growing fields knows games can get played sticking labels on jute bags, whether so-called ‘organic’, Fair-Trade certification, or, dare say, around even the most hallowed grounds (e.g., in the Church of the Holy Sepulchre in Jerusalem, priests stand guard inside the inner sanctum holding offertory plates in hand, & this, after young Jesus threw moneychangers out of the temple). Maybe before Amedei’s celebrated coup obtaining “exclusive rights” to Chuao (eventually broken & lost in 2009), Bonnat secured enough shipment containers to require forklifts, & it continues to tap that archival vault. But given the result here, it could be nearing the bottom of a depleted barrel. Culprits: Bonnat ups the heat on the roast, which along with the slightly greater cacáo content (75%) wipes out a lot of sweet nuance, plus butter submerges quite a bit of flavor, rendering a recessed accounting.

So is it really Chuao? It’s L.L. Chu-wow-wow & that ain’t referring to no li’l pet creature.

One suspects from the tobacco / leather afterburn, these beans are sourced from the upper part of Chuao’s plantation where Trinitarios are a greater part of the mix – a poor step-brother – & outside the confines controlled by the 40+ partners of the Chuao Farm Workers Company cooperative that grant license to Amedei, which represents about 2/3 of total acreage under harvest, leaving a third for Bonnat to swoop in & scoop up. Or, alternatively, it might come from an altogether different locale since Chuao cacáo has been transplanted to grow elsewhere in Venezuela, indirectly bypassing any exclusivity arrangements involving the crop in the Chuao Valley. Chances are, it's a combination of both.

In any event, this version has naked scaffolding, showing the seams & baring the complex, from unearthed guts to a sorghum fruit basket in some kind of chocolate Pompidou Centre. And it holds the lone virtue Amedei’s wall-to-wall/floor-to-ceiling monolith of a Chuao shuts out completely – a ray of light by way of a beam of coconut cream.

Is it as good as that other, more famous Chuao? Ooooh, comparisons can be so unfair & cruel. 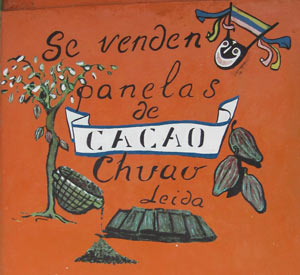