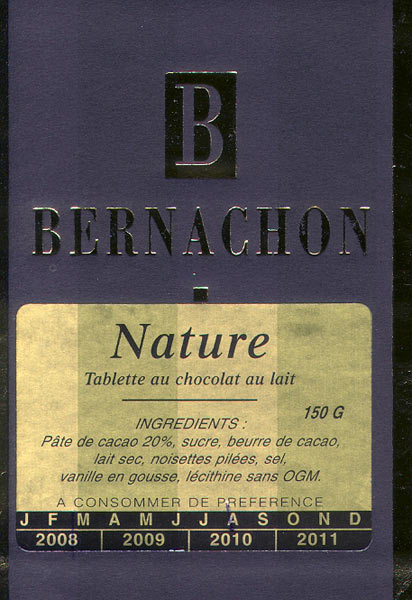 Impact
Another rock-steady production from Bernachon. The ability to hit a note & hold it beyond the operatic, more in line with digital recording technology or some constant in a higher-math particle-physics equation.
Appearance   4.7 / 5
primped-out for the beach
Aroma   8.5 / 10
extravagant cocoa-mocha caramel w/ that only-in-France underbelly of dairy cow's milk so rich in heavy casein it oozes polymer vinyl + enough clay to make Play-Doh™
Mouthfeel   13.9 / 15
Flavor   42.1 / 50
soft caramel knowledge rolls right in & keeps flowing, transmitting tiny electrical impulses to the pleasure centers in the brain... undifferentiated except for a toffee bump up & back down the caramel camel hump -> polishes off malted wafer for a little mocha chip action
Quality   18 / 20
Don't be fooled, kids, by the 20%; this is no cocoa smiley show or carnival barking candy bar. Bernachon only counts cocoa mass; add in cacáo butter as almost all other manufacturers & it bumps up to probably 27-28%.

Still, in the tradition of late-night DJ Freddie Crocker, a Quiet Storm soothed in plenty of cream & cacáo butter to cut the vanilla amplitude & submerge a rather deep roast that gets the most out of what nonetheless amounts to a lean percentage for that long 'n easy caramel roll.