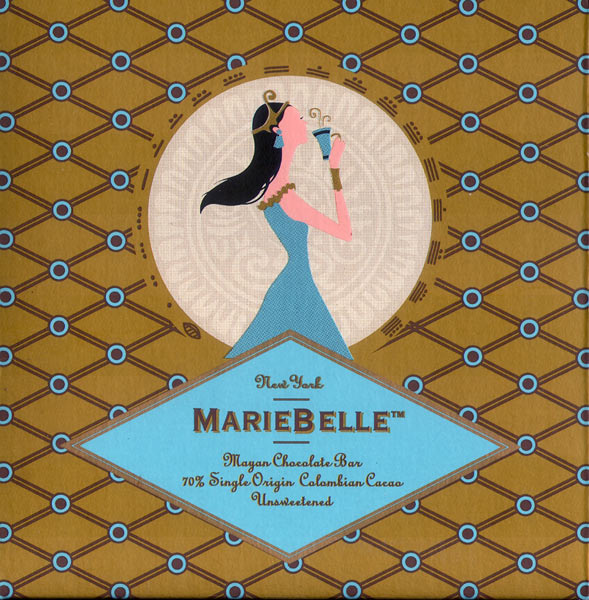 Impact
NOTE: This bar produced under a private label for MarieBelle.

Exploiting a possible historical connection between Central & South American cacáo cultures, this from a Colombian cocoa bean wrapped in Mesoamerican ethnography. Theories abound that the Panamanian Isthmus formed a bridge between the Nawa-language Mexìcâs (Aztecs) to the north & the Muisca Confederation which once flourished in the highlands of present-day central Colombia (whose abundant wealth had the El Rey Indio’s naked body covered in gold dust before diving into a lagoon that gave birth to the legend of El Dorado).

Today in the Cauca River Valley of Colombia's Antioquia region a cacáo beverage, remarkably striking to that of one prepared in traditional Mesoamerica, suggests both cultures drank a similar libation, alluding to cacáo’s multi-status as aliment, medicine, & ritualized sacrament.

At approximately 30%, milk's impact is no more than equal to its weight as cocoa tannins cut across the dilution, modulating thru the dairy filter quite handily, its bitters only tempered & caramelized without the expected bigger cream tones that might’ve caught both thunder & lightning in a bar. However reposed, milk does roll off the hi-fruit top notes in Santander’s 70% base & robs it of a good amount of clarity, contributing its own lactose sugars but missing the clean crystal clear white sugar sweetness, so overall the bar shows rather occluded.

Still, this dark exposé amounts to a break-thru in light of its composition, surpassing even the threshold of Slitti’s Lattenero as to how far & high - percentage-wise - this Dark-Milk trend can go.