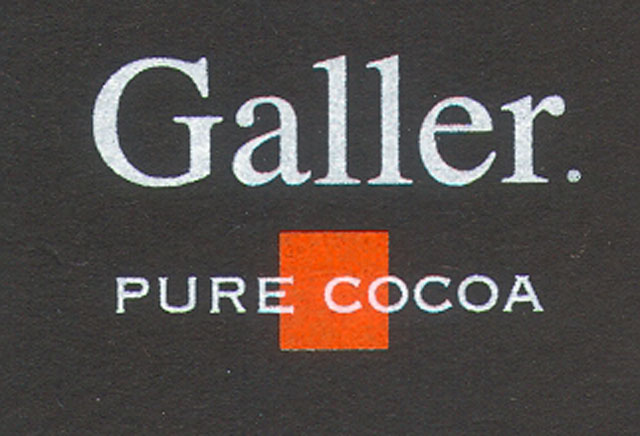 Impact
What rock was turned over to come up with this sludge whose craptacular nature can be tasted thru a steroid-induced coma? Stuff ain’t worth the space on the web let alone the mouth.

Gotta a lot a gall to sell this at all. Just another nail in the coffin called 'Belgium Chocolate' which holds more iron than wood nowadays that its scrap heap of chocolatiers rarely engage in chocolate but mostly in commerce.

Galler bills itself as "the real Belgium chocolate". Those who’ve been & lived there know that at its peak-best, it could be sexy, intelligent, deep-poised & supple. Galler & its ilk should have their citizenship revoked for cocoa-terrorism & defamation of a nation's once proud craft.
Presentation   2.9 / 5
middle-of-the-road cardboard gift box in caution-orange, + gold tea-paper inside, whose snug cradle holds Whitman Sampler-style pieces finished in a waffle-iron imprint on the bottom & all-black as coal on the eyeballs... go on pick ‘em up (doubt these are molded... apparently stamped)... odd track-marks on the bottoms indicate each flavor has its own enrobing belt...thick bottoms, thin bottoms, heavy walls, thin walls... this stuff looks battered worse than the dancers at a 3rd-rate topless bar on the edge of town somewhere next to a truck stop... totally used up, strung out, track-marked & lumpy in all the weirdest places; really poor craft, even the enrobing machinery must be embarrassed about this
Aromas   2.4 / 5
synthetics waft out the box: all tutti-fruit as gummy bears on the nose & St. Josephs' Cough Syrup #2 (for, count 'em, 2 waxes).... paraffin & carnauba wax... all Spidey senses tingling here...’Danger Will Robinson’... then some bereft cocoa, artificial cherry, cheap black tea, & cardboard mold
Textures/Melt   4.7 / 10
Flavor   24.9 / 50
take a nip & be in for Bizzarro World year-old Halloween candy; ganaches could be mixed with Dimetapp™ & Crusty-the-Clown underwear textured pralines; tooth-achingly sweet / coma-inducing sugar levels... hi-sugar burn & once that wears off... the finishes come sour
Quality   12.6 / 30
Unspeakable; not fluent in its language, lacking any depth, intelligence or skill/craft. This box makes you realize how wonderful just about everything else that calls itself chocolate really is.
Selections
Tarragon - dimensionless / very surface-oriented & rather anise-like in a murky / watery way
Café espresso in a heart-shaped shell; good butter-cream backing if low-CQ (Chocolate Quotient) until the finishing touch as bulk cocoa tannins drain the coffee
Champagne - big on the grape, Galler just pouring it on, a bruising, buxom crush dissipates only at the tail against wisps of struggling chocolate underfoot, gasping for air
Pistachio - backed with marzipan-flavored sand; sums up into baby meal
Cognac - a bit boozed though quite the success... less because of cocoa mass & more from the cocoa butter that shields the alcoholic vapors by enveloping them in a sensual heat wave
Lemon Marzipan - fairly creative though the components stay separate as canapés on a finger tray until the very end, where they meld nicely, only to leave behind a potent citrus wash
Chambord - air-fluffed ganache (ala 3 Muketeer’s™) for a fart of framboise with artificial back captured inside a Vick’s Cough Syrup™ bottle disguised as a Dark-on-Milk Choc ganche ladled by a drunk bartender