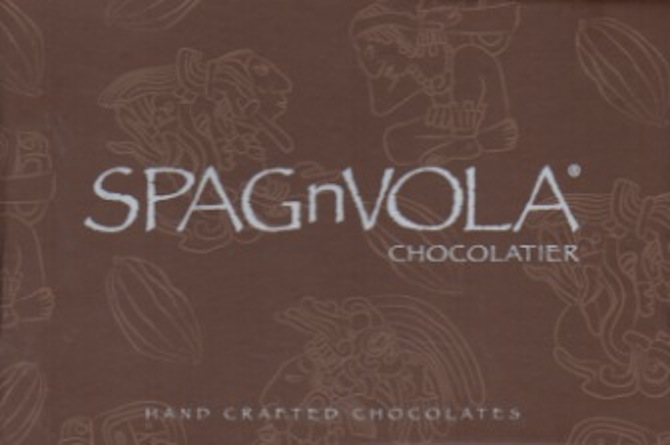 Impact
No, not SPAM 'n EBOLA (well, k, the soul-sucking White Chocolates below are somewhat symptomatic) but SPAGnVOLA -- a cartography reference to a 1534 Spanish map labeled Isola Spagnvola, aka the island of Hispaniola (current day D.R. / Haiti)... en route to their conquest of the New World.

The name evokes a time when the island served as a transshipment point for cocoa & other tropical groceries from the Americas to Europe, right before Hispaniola welcomed cacáo transplants to take harbor there permanently.

By cultivating cacáo on its own property in the D.R., SPAGnVOLA taps into the roots of the origin. Part of a wider re-colonization in the premium cacáo groves now that only faint traces remain of the island's aboriginal Tainos (Pre-Columbian colonists). Pretty much the story of humanity writ small -- everyone's a refugee except Africans living in Africa.

Presentation   2.9 / 5
stock box set replete with plastic trays & pleated cups
enrobed squares, completely at odds with the multi-shaped designs promoted on the label's website; each demarcated by a fragment of their flavor infusion sitting on top
Aromas   2.7 / 5
polymers exuding from the White Choc give way to cocoa jam (the influence of D.R. Dark)
Textures/Melt   8 / 10
Flavor   40.2 / 50
very steady notwithstanding that Whites bring halting stops to the box
generally strong chocolate spine to the infused, measured ganaches
Quality   22.7 / 30
A box that plays it safe.

Other than those White soul-suckers, a good if standard set with the occasional semi-dare (Rosemary).
Selections
Jasmine Rose -- Callebaut's White slag over-runs the florals with chalk & caulk til a drop of soapy rosewater seeps thru the very end; inferior ingredients; inartful

Cranberry -- a White repeat of Jasmine Rose (above) with fruit instead of flowers; indiscreet

Passion of the Sea Salt -- no passion fruit whatsoever, just a tempest of a salt bath that washes the walls of a quickly melting chocolate; indelicate