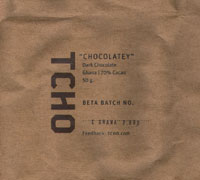 Impact
Tcho looks & phonetically sounds like some Japanese manga character whose name spits out of the mouth kind’a the way Bowie sang “ch-ch-ch-changes”... then hooks up with the Keebler cookie elves to make this chtonic chocolate of a bar, plainly packaged in a sort of kewl ration-pack for the Jetson’s set.

The flagship release from a Silicon Valley start-up; yep, the same terroir that brought us Apple iPods & Oracle systems. Guess that’s just the way the cookie crumbled after the tech bust of the boom 90s & early 00s.
Appearance   4.8 / 5

Chocolatey has all the feel of The Wired Magazine version of Callebaut’s NJ test center where it conducts focus groups on what the guinea cogs want, then inputs the data into a Excel spreadsheet & spits out whatever represents the mean average. As such it misses that personal touch; the same difference between a late-model Toyota vs. a big-block 60s Chevy. Nonetheless, just as Toyota eventually took down GM, Tcho is on to something & this unit for the most part accomplishes what it sets out to do: establish undifferentiated baseline cocoa flavor, termed chocolarity & measured as CQ (for 'Chocolate Quotient') by the C-spot™. If Tcho applies this approach, generalized as hi-tech meets lo-hanging fruit, to the entire sequencing chain from Bud-to-Bud™ (cacáo flower bud to human taste bud - including seed genetics / husbandry, soil conservation / terra characteristics, post-harvesting / processing) it may very well patent the new chocolate of the 21st century on route to engineering the inevitable: GMO cacáo.