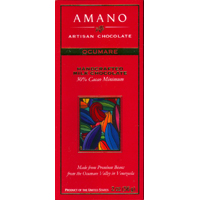 Impact
In the Great Chain of Being where angels float above humanity (because they take themselves so lightly, says G.K. Chesterton) & God hovers over all, Amano’s Montanya is basically the bucking bronco to this the more laid-back, bareback-ride down the mountain to the lower Ocumare Valley on a... unicorn.... puffing a steam of powdered cream thru its horn while having an abortion.

If you neither believe in fantasies & mystical creatures, nor care about the unborn, then just thank God you’re an atheist.
Appearance   4.4 / 5
got the look... of serious MC
Aroma   8.1 / 10
tang cream, almost a tangerine dreamsicle, on the headnote except for smoked Gouda cheese underneath -> rare magic oregano leaf -> dust ‘n dirt trails lead to bluestone & methylbenzene
Mouthfeel   9.3 / 15
Flavor   38.6 / 50
powers up instant karamel -> turgid molasses-toffee swell w/ pepper -> hits the skids, turns a little rupicolous, then abruptly runs bland & sweet, trying to sort out & work thru Textural issues -> returns briefly as rosewood knots up a cherry stem & stone -> cream blank -> faint Oreo™ foregrounding cookie dough -> vanilla egg cream, no yolk... pilot ejects
Quality   14.2 / 20
Mission aborted. Beginner’s luck, all of it bad, the first Milk Choc release from a label which up to now concentrated on Darks in the 70% range. One of the most erratic MCs around that crosses-over radically.

A power-block / sensational start – deep throated & big boss with huge CQ Factor (Chocolate Quotient) if only momentarily - just creams out on a premature evacuation, borderline cloying, creating a staggered intensity going from way high to real low that does, however, catch a 2nd wind in a kind of post-firing, thanks to a strong roast. Very layered & segregated, with only an incomplete overlap of elements in sedimentary deposits laid out, for the most part, horizontally – no simple feat. Amano’s trademark gentle conche betrays the components, causing Texture to miscarry this pupa, never letting them fully mix & play until the art of chewing is thru.

The beauty of new era craft-chocolate is getting paid for learning from one’s own mistakes or, as Oscar Wilde said, experience is the name everyone gives to their mistakes.