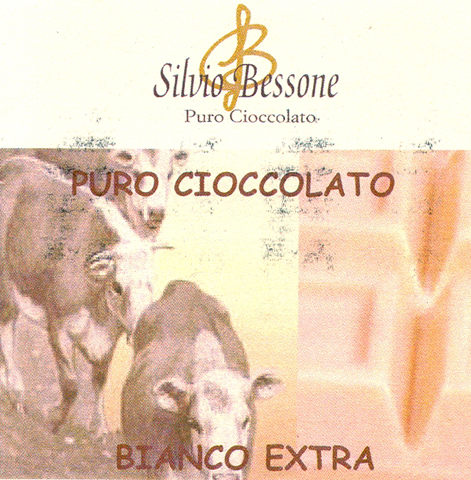 Impact
To paraphrase T.S. Eliot, making chocolate would be easy were it not for bitter beans.

White Chocolate solves that by extracting the butter before discarding the bitter mass.

This bar then goes on to amplify what’s left into one of the loudest Whites ever that sends eyeballs flying out of their sockets as the head begins its tethered spin to a sugared onrush.

For EMS glucose cravings: this is one sure hypoglycemic aid & a lot cheaper than Diabetic meds.
Appearance   4.7 / 5

Aroma   7 / 10
got its color all over its nares: lemon-egg yolk -> dense-pack powdered-milk produces caulk & putty for bizarre household counterbalance-> vanilla Playdoh™ -> milk thistle -> breathes out candied lemon-sunburst in cake-frosting topped w/ white melissa & passion flowers to salvage itself
Mouthfeel   13.9 / 15
Flavor   39.1 / 50
tracks the Aroma pretty well: lemon frosting -> cake flour -> sweet butter cream -> egg cream roused in vanilla -> vanilla restraint on some big soy (lecithin)... sputters off an echo of the objectionable flags in the scent -> 2 intermittent flashes of red bud flower + red gum tree against cherry licorice
Quality   15.7 / 20
Pretty void of chocolate (whether Dark analogues or even White ones) & what is there gets well buried in the mix after the pre-treatments bleached it (doubtful this oil was pressed in-house – feels so outsourced).

Cacáo the handmaiden to all other components, including lecithin which swells the Texture round but also leaves its mark on Flavor. And those floral dots could just be offshoots of the vanilla orchid, supplied at levels approaching overkill that dominate the 2nd half of this bar’s lifeline, the grace notes to an otherwise standard rendition however for a rather Tahitian-vanilla character.

Hence, the configuration amps into one of the loudest Whites (such as it is) on the market.