Impact
Loloma is the closing salutation to Bula’s opening 'Hello' in the Fijian language. Both mean a whole lot more.

All bar-smiths make chocolate but Tomo (short for Tom Ohito Zukoshi) at Adi also grows it, nourishes it, & harvests it while talking about & to it. He knows his cacáo because he loves it. That is loloma &, this, is his secret ingredient.

Which puts him in the same league (but different class) with Claudio Corallo & Danielo Vestri, each kings of their own domain.

Tui Viti – 'King of Fiji' when it comes to Tomo with chocolate.

In proclaiming cacáo “evil”, Tomo means it in the same way thuggas say ‘that shit is sick’ or ‘the mothafucka bitch be retarded... a total nymphetamine’. In other words, like the mob-term ‘CRAZY’ or to use another Fijian word – mana (spiritual power) which resounds with the Classic Mayan k’ik (vital essence), or the Zapotec of Oaxaca’s pi (life-force) & teotl (Mexìcâ/Nahua for sacred). Variations of what people experience in Sedona’s energy vortexes... & harkens all the way back to the originators of the spell we call chocolate.

‘Native-filth’... from the same good Earth as missionaries who preached & practiced that cleanliness is next to godliness.
Appearance   3.9 / 5 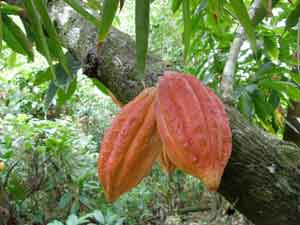 None of the boisterous jabs coming from some of Adi’s other bars that utilize underfermented butter from slaty beans, giving this bar a naturally refined feel despite some rather undeveloped technique in the processing.

The gradations in Adi’s line-up (100%; 85%; 80%; 72%) show a linear progression from mostly nuts & grains at the upper percentages to obviously sweeter / more balanced canvasses tweaking out fruit tones, however minimal, in the lower percentages. Much has to do with the varietal mix (though both the Amazon & a Trintario-like hybrid are each somewhat soft-spoken, devoid of strong chocolate backbone, hence the intriguing use of brown sugar as an additive which tilts the profile). Or maybe it's just this crop’s harvest &/or this particular quadrant on the island. Or it could be the perennial characteristic for Fiji.

Worth paying attention though because Adi brings to the table some unusual flavor types & continues to experiment to realize this origin’s full potential.