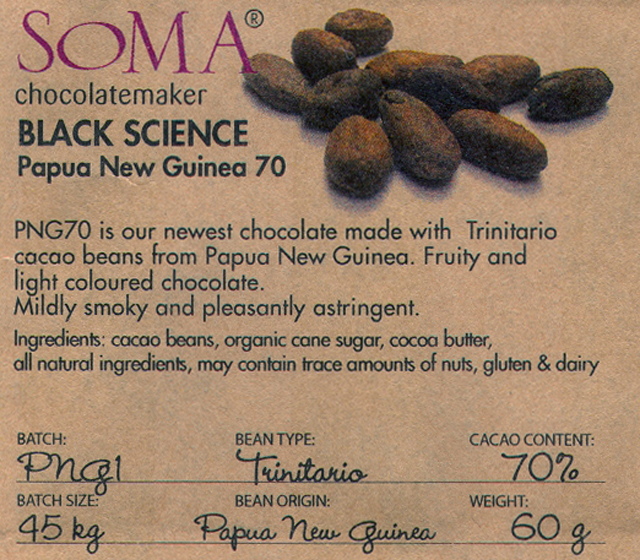 Impact
Tire d'érable (in French-speaking Montréal Québec), aka Maple Taffee or "sugar on snow” elsewhere (merely hinted at in Genevieve Grandbois Les Classiques collection), is a live confection made from maple sap & pure snow. Just boil maple sap to about 235ºF & pour it – while still in its molten state - onto the fresh-driven snow whose countering cold-temperature forces the sap to instantly thicken.

Canadians serve this immediately with donuts, pickles & coffee to cut down the sweetness.

Or during summertime they can eat this bar instead for a near substitute.
Appearance   4.7 / 5

Due to climate conditions, the island traditionally smokes its cacáo beans to dry them.

Soma further countenances that, with a hi-heat style of roasting to give this bar a back shadow in the recesses. Then lavish butter (ala Coppeneur’s Tabuna) tames the flames; ditto a relatively light touch (think Domori Papuander) in other parameters of the processing circle.

From the looks of the label marked ‘Batch #PNG-1’, this appears to be Soma’s first crack at PNG & the result shows the house may need a couple more iterations to get a handle on this origin. Expect more & better in the future.