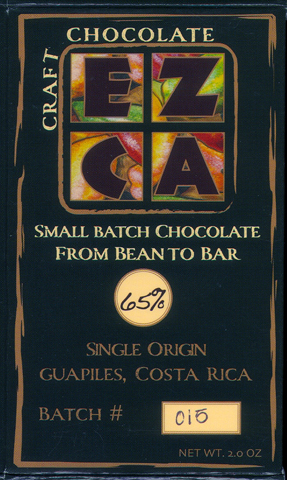 A chocolate that never wanders far off its base cocoa, veering free from droning-out into a coffee cup as can happen with Costa Ricans. Mirthful sugar sees to that, as does sound vanilla control. Neither feel overbearing.

Very early results from this start-up indicate a preference for pure strength: the highest cacáo-content allowable with the fewest additives possible, depending on circumstance. For example, the Carenero 80% and Ocumare 73%; both contain cacáo & modest sugar & that’s all. Due to their genetic & geographic endowments, each can get away with that. Guapiles is less fortunate in the botanical-lottery & calls for greater calibration. Hence, the longer list of ingredients (cocoa mass, sugar, cacáo butter, vanilla), plus the relatively low 65% weight. Still, an overall dark-toned bar considering those blackened layers (with an assist from the roast), making it seem less sweet than it actually is.

From Hugo Hermelink's Finmac Cacao Plantation near Guapiles whose beans have been seen before – in De Vries suite of Costa Rican bars (84%, 80%, & 77%) as well as Gail Ambrosius’ Rica Organica truffle).