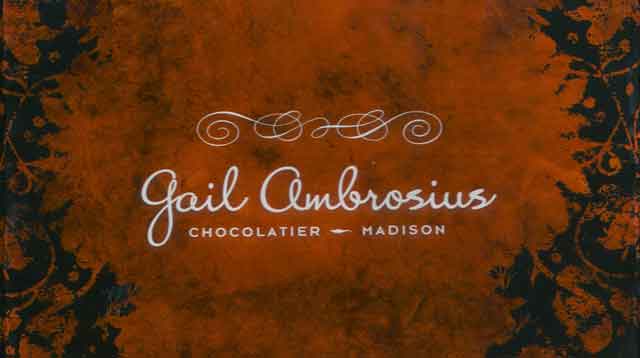 Impact
“I didn’t make it up... my name really is Gail Ambrosius”. Oh, c’mon now.

The Sean Askinosie of boxed chocolates: intensely conscientious. But self-effacing in her philanthropy; no slick ad campaigns with buzz-catches like ‘organic’, 'fair-trade’, or ‘traceability’, yet there’s probably more of all that to her sourcing than the vast majority of brands bludgeoning consumers over the head with such labels. As much a storied event in a box as this is a bunch of flavored-chocolates.

Neither innocent nor ignorant, Gail Ambrosius actually visits the growing fields, puts her boots on, walks the groves, & wields a machete or two, then returns home to relay the experience (dirt under the fingernails to prove it) in every little piece that amounts to approximately 60 seconds of nectarous meltdown - & an unguent for sore bones & feelings.

Hell the woman can grind her own beans with a hand crank, & transports tempering machines down to Central America to make life easier for the locals there. She’s even smuggled the stuff across borders when going thru the normal channels would mean interminable delays tied up in massive red tape. A descendent, no doubt, of some strong stock; whose grandmother would probably dig out by hand a car stuck in the ditch while the men-folk sat inside listening to the radio waiting for a Triple-A tow-truck to arrive.

Sometimes it takes a woman to do a man’s job.

And that same spirit transfers to her creations & beyond. Just how far beyond? On Judgment Day, many Americans, especially those near Milwaukee, WI, envision that Jesus will arrive... riding-in on a 2-wheel legend of a chariot – the front named Mr. Harley, the rear Mr. Davidson - leading the Hell’s Angels back into paradise in the ultimate show of forgiveness & redemption. These bombones might be in their saddlebags... got that musky ‘must-have’ underground contraband appeal... & just another reminder when hunger strikes, this is the hi-octane fuel of the gods.

Presentation   4.4 / 5
Victorian-Gothic; very dark canvases; mostly mid-sized Swiss-style truffles (smooth orbs as opposed to rough French clumps); tight hand-finished seals
Aromas   3.8 / 5
chocolate airstream of cool reserve punctured by spice, especially toward the peppered end
Textures/Melt   8.7 / 10
Flavor   40.9 / 50
busy yet stark (potentially mistaken as indelicate or heavy-handed)... the dials fairly max’d; hi-cream fill mostly a textural component, as fortified flavors center on varying balances between cacao + a complex scaffolding of additives; little in the way of excess manipulation & gross embellishments (e.g., moderate sugaring), relying mainly on foresight & the force of ingredients paired to a manifold of origin chocolates (Colombia; Venezuela; Costa Rica; Peru) that’d smack of a dilletante name-dropping countries in her passport (re: Vosges) were it not for the results
Quality   25.6 / 30
Ambitious; perhaps overextended – so many base couvertures & a broad arrays of inclusions. Excels in the experimental range, some inventive pairings (blueberry with reishi tea strays quite a ways from strawberries ‘n cream) that present highly effective challengers to the Pal (for palette), for more see Shitaike or the extensive elaboration on classic Earl Grey below. Even the more conventional chocolate standards are tweaked-out toward eccentricity... re: Salted Caramel.
Selections
Rica Organica - unadorned other than crowned in copper-tinted cacáo pod ornament; cream adroitly tames Costa Rica’s herbal / olive aspects from the same farm supplying De Vries’ bars of this origin thru a mildly astringent passage leading to macerated golden raisins swept in cocoa dust toward the very back; raw in nature but not in execution
Caramel w/ Salt - lavender-like on the nasals but the bite is all salt & molasses w/ some soft pull, the 2 trading off in alternating currents of disequilibrium that come back into phase w/ a sodium-toffee hit at the sea bottom; a tongue twister in need of slightly more chocolate backbone
Fig - tremendous contrast between the shell-snap & silk-center while flavors intersect seamlessly at complimentary angles, a dark plum-inflected cacáo layered by black mission figs... goes to seed on licorice / coffee / raisin tones; vaunted
Shitaike - WTS! (What The Shit-aike); good cacáo occasionally inheres w/ some fungi-mushroom-dooky (particularly the Peruvian kind w/ its resident herbal-forest vines climbing all over the taste-buds) & this just magnitizes that, starting on a Dark redolence brooding ever deeper into subsoil terrain while cream adds bouyancy, never letting the package plunge into a sinkhole; exceptional
Earl Grey - chocolate-tea mash / clash pit... cacáo from all over the map - Venzy, Mad, Africa and Java – orchestrates bright cacaphony accentuated by bergamot flashes from Earl Grey... sprinkled w/ lavender buds to exert some control, centripetally spooling it all back from the brink & the edge, the bridge & unifier twixt the upper register & the basso profundo toward a core chocolate vortex w/ reverberating wave mechanics; rambunctious
Machu Picchu - all good, just lacks some identity despite a battery of additives (caramelized almonds, nibs, cinnamon, & vanilla) which mainly cancel each other out in service of subduing the traditionally unruly Peruvian cacáo employed here, leaving a mysterious trail of fine coffee grounds (not on the list), of a kind grown at high altitude
Mint - Santander’s 65% layered with Gail’s own garden herb (strong... leaf, stem, et. al... but clear & clean) together foam up a marshmallow-mint ball that rolls then wobbles a mite out of sync
Blueberry - far more complicated than it sounds; blueberry w/ a twisted difference that runs an imbalanced continuum between Sweet (the berry) Bitter (astringent reishi tea, the immortality mushroom that clears up respiratory blockages & clears the head) as BitterSweet cacáo (61% Venzy chocolate) gets lost in the middle; the final gestalt topples over all nuts: almonds & pecans
Raspberry - initial medicinal sip quickly candied into frothing cough syrup, the awkward pour of Chambord liqueur onto raspberry jam; Cacáo Nibs to the rescue... fail to save it; a mishap
Cognac - heavy bodied but remarkably vacant; alcohol vapors subsumed; even the promised stinger from candied ginger fails to register... until the rear, & then rather unaccompanied; another miscarriage of Ecuadorian cacáo(??)
Lemongrass/Ginger - perhaps overdone... too little differentiation / too much vertical integration among lemongrass & ginger embedded in a typically green & brightly acidic Peruvian cacáo, all topped off by lemon peel; however, cream ganache beautifully creates a citrus custard w/ late-stage caramelized-cocoa for crème-brulée FXs
Cinnamon-Cayenne - based on an Aztec beverage but made with Colombian cacao (ok, possibly the Chibcha from the highlands of present-day Colombia may have ventured north to trade with Mesoamericans) & cinnamon (neither indigenous to the Americas nor used by the Aztec / Mexìcâ in their chocolate preparations.. it’s a Spanish thing seeking to mimic a secret native ingredient mecaxóchitl); nonetheless, a firebrand that brings the soft heat from multiple directions (ancho, cayenne, & chipotle) all balmed by heavy cream fat then rolled in cocoa dust to make an Olmec proud