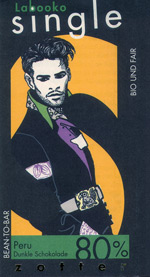 Impact
Sourced from Piura, the northern coastal redoubt, a sort of Esmeraldas of Peru – a bit off the beaten path from the rest of the cacáo in this country. Here Pizarro founded the first Spanish city in South America in 1532, so named after the Quechua pirhua, meaning ‘abundance’, & the staging area from which he set out with but 186 conquistadores to meet the 80,000-man army of Sapa Inca Atahualpa of the Tawantinsuyu (‘Land of the 4 Quarters’ aka Inca Empire) that nominally controlled the territory in these parts. They met in Cajamarca, just to the southeast.

In a psychological poker game, each man sought to co-opt then dupe the other, plotting they’d get the better of their opponent without a fight.

The Spanish found themselves in a dilemma. An assault on the Inca armies overlooking the valley would prove suicidal given the force disparity. Retreat could be interpreted as a show of weakness, inviting pursuit & perhaps worse in the mountain passes. Doing nothing might undermine the air of invincibility swirling about the Spanish ever since their arrival in the New World.

In a do-or-die scenario, the conquistadores, whose only reinforcements lay 2,000 miles away in Panama, chose a decapitation strategy of ambushing the leadership, in the hope of collapsing the command structure & disintegrating the Inca forces into chaos & mayhem.

Atahualpa decided upon a meeting with the Spanish while leaving the security detail of his grand army behind which he fatefully kept outside the city walls, thinking this gambit a demonstration of goodwill.

He critically misjudged the moment & played right into Pizarro’s hand.

The Spaniard immediately delivered the customary Requerimiento (recognize Jesus Christ as Lord & Savior, & Charles I of Spain as King). Naturally the Inca refused. Handed a Bible, Altahualpa supposedly threw it – the first book he’d ever seen - on the ground. show more »show less «

In a surprise attack, the Atahualpa’s royal entourage was devastated during the evening of November 16, 1532 in the great plaza of Cajamarca. The Incas never before saw charging cavalry on horses, nor gunshots let alone great balls of cannon fire. Thousands were lost... save for the Emperor, captured alive.

The battle cost Spain but 5 soldiers.

The Inca had such a highly centralized chain of command, designed to protect the emperor's wellbeing above all else, as if so sanctioned by their gods. Once the Spaniards held the emperor hostage, their small number effectively paralyzed an entire empire. Internal dissention & civil unrest ensued.

The whole business of ransom could then begin. Similar to Cortés, whom Pizarro emulated, holding Motecuhzoma in Tenochtitlán, Pizarro used Atahualpa to convince the Inca military to back down, threatening to kill the Emperor if they counter-attacked.

Then the second grave mistake: the Emperor offered a huge ransom to buy back his own freedom: rooms full of bullion & silver - El Cuarto del Rescate (The Ransom Room) – the ultimate G-unit in this face-off over gods, guns & gold. This pleased the Spanish but they never intended for his release. They kept him alive only as long as he proved serviceable to their ends. Eventually, with his usefulness in decline, they garroted him.

His death signaled only the beginning of the end, as it would take several more decades for the Spanish to pacify the Amerinds, which they accomplished at Vilcabamba in 1572 when the last resistance led by Tupac Amaru was put down.

Some say they never really have... & the struggles continue today.

Likewise, this bar is hard to completely put down.
Appearance   4.6 / 5

Thru the jungle of myth-information.

Neither rainforest nor urban jungle, Piura receives 1% annual rainfall. Its cacáo, cultivated on the plains, relies for irrigation on runoff from the Andes in a similar dynamic to Chuao.

Further, the color description reflects probably a mutant rather than any neo-Porcelana.

Nonetheless, their rather rare & perhaps fragile nature make them unsuitable, according to the growers, for monocultures. Hence they plant the ‘whites’ with other cacáo varieties, proclaiming that this type & biodiversity go naturally together. Fairly true but unfortunately cacáo crossbreeds promiscuously, often to inferior progenies, risking that this particular variety will disappear.

In any event, while they darken somewhat during fermentation (as do virtually all cacáo seeds) they retain a rather light hue. Zotter then applies an LCD-roast set to low temperature & to slow tempo, & conches a "mere" 16 hours to seal it.

The result feels undeveloped overall despite quality CQ (baseline chocolate flavor without any nuances or interference from under/overtones) & in such abundance especially at the front.

Trouble looms when that cocoa is held hostage to raw cane sugar that overly colors to murder it. Although the pair create a unique moment during the handoff at mid-palate when chocolate yields to sugar cane, it tastes starved, thirsting for moist fruit. Salt packs it away for good measure – a dark dim tone, virtually absent any highlights whatsoever.

So downcast & demoralized a chocolate that Zotter might’ve manufactured this listening to the Adagio / 2nd Movement of fellow Austrian Joseph Haydn’s Farewell Symphony.