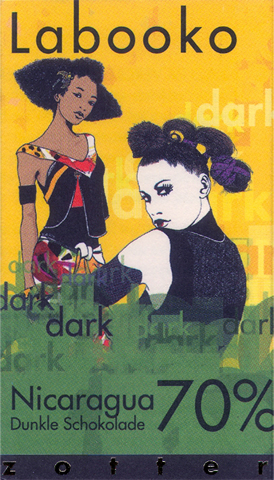 Linz? The city on the Danube in Austria, just north of Bergl where Zotter manufactures his chocolate?

Do they grow cacáo there? If so, how... in hydroponic tubs?

Could UNCRISPROCA be a missionary group trawling earthly paradise for lost souls to convert in the tradition of the Basil Missions in Ghana or, closer to this bar’s source, the good work of Émile Menier in Nicaragua during the 19th century?

The beans for this were gathered in an area about a half-hour downstream from La Cruz, Nicaragua on the Rio Grande de Matalgalpa. Founded in 1997, UNCRISPROCA membership includes 150 or so cacáo growers spread throughout 14 communities. In addition to their fieldwork, they operate their own adult education programs.

Envision this bar as a kind of river-to-river cruise (the Danube to the Rio Grande) connected by a straight chocolate-canal instead of the Atlantic Ocean (& then some) that roils between them.

Goes down about as easily as Anton Bruckner’s Symphony No. 1 – the original 1866 Linz Version.

But unlike that score which the composer himself likened to a “saucy maid”, this bar, though nothing blank about it, has a noble simplicity with a certain tedium of genuine ‘blandeur’.
Appearance   4 / 5

Aroma   6.9 / 10
very riparian: woods, vines, mud, manure, & silt -> coffee grounds along the banks
Mouthfeel   12.7 / 15
Flavor   40.3 / 50
straight on: chocolate coffee-cake mix -> charred bottom -> quick spice -> cassava -> expeller cane juice (low cut grass) -> anise
Quality   15.8 / 20
A dead simple uniplex. So steadfast to be almost static. Still, some depth charges – largely burnt edges; among Zotter's hottest - provide perspective onto an uncomplicated chocolate of enormous CQ (Chocolate Quotient or pure cocoa flavor free of any over/undertones). Very much akin to TAVA's Vanuatu except this even more volcanic. So naked in its profile it wears absolutely no clothes for nuances, color, & offsets. So different from Zotter’s Nicaragua 80 to feel strangely foreign. In fact, each should swap out their sugar-content to the other, & probably to the benefit of both. (Extra sugar in that 80% might catalyze greater fruiting while this could stand more variation.)

If he pulls these beans from more than one grove, then the pods either nullify each other in a canceling effect or they’re excessively consistent.