Impact
One of the earliest records of pre-Columbian cacáo production in the Americas comes from the Nicoya Penisula (modern Nicaragua). When Oviedo conducted his comprehensive survey during his visit between 1527-29, he chronicled how cacáo beans circulated as a kind of currency there in his account titled Historia General y Natural de las Indias, including a now rather famous price list:

Note the near equal exchange rate for the last two items.

Hmmm ; makes perfect sense. The rabbit symbolizes fertility; the prostitute... well, in the pre-PC era let’s leave that to the reproductive imagination.

According to the Unofficial Underground History of Chocolate published right here / right now by the C-spot™, this all leads to one inescapable conclusion: Hugh Hefner conceived the Playboy Bunny™ while biting off the ears of a hollowed-out Easter Bunny... in the finest tradition of sex – chocolate – money. Whichever way it’s sequenced, it flows smoother than a mantra in a multiplication table –

The legacy endures up to today... regular tricks routinely take bonbons to their prostitutes (or valentines to their lovers for that matter).

Chances are 4 out of 5 that Josef Zotter fell under the influence of Hefner’s magazine because 4/5 = 80%, the precise cacáo-content in this bar from Nicaragua... just lightly adulterated with a quintile of sugar & a dash of salt.

It all adds up & comes together: progress – the more things change, the more vice / virtue share the same coin.

Like Hef, Josef Zotter must be filthy pajama rich. 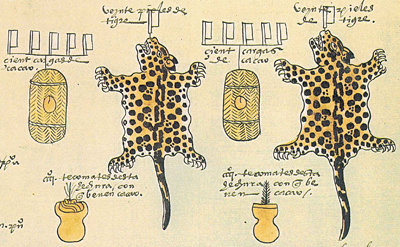 In his portfolio, he has some hits & misses but this, along with the Peru 100, show him becoming a master of the upper percentages.

Development organization Horizont Cuvée 3000 supported his prospects in Nicaragua. Specifically, Bruno Plunger & Doris Knoll guided him into the more remote areas of the backcountry. The Sandanista experience there resulted in a situation rivaling Cuba where modernization lags behind, thus sparing some older groves from the onslaught of challenger clones. This leaves fairly consistent cacáo trees, by no means uniform, but of overall decent residual Criollo germ plasm.

If the Spanish conquistadores, as history leads on, carried cacáo seeds along a chocolate trail that started for them in Mexico in the 1500s, running via Nicaragua to Venezuela during the 1600s, some of which ended up much later at CRU in Trinidad for re-importation back into Nicaragua, then it might be possible that Nicaragua serves a recombinant quasi-Criollo blend of Venezuelan Chuao x crypto Mexican-Porcelana.

Confused? Well, it all adds up to a veritable rarity.