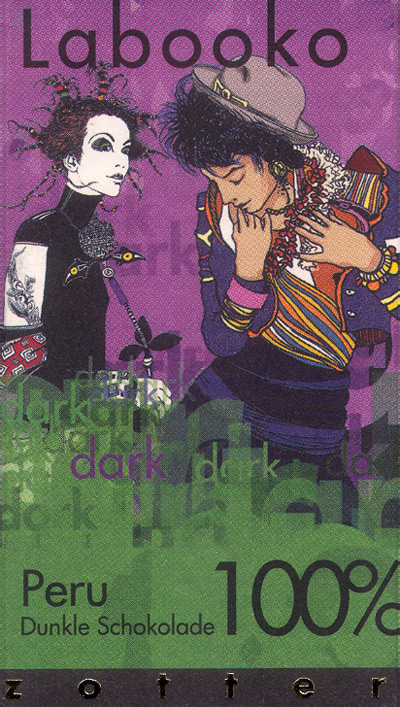 Impact
Dark... Darker... Darkest. Without any added sugar, this just shuts the lights off. Totally Darksome, to bring out the contrast of cacáo’s intrinsic highlights.

Maybe studying the Pishtacos gang – so named after the ruthless assassins of indigene Quechua legend who ambushed solitary victims & drained their fat as an offering to the gods to make the land fertile.

Others tell of tales of cannibal bandits who ate the skin & sold the fat.

Either way, this chocolate contains enough tallow-like cocoa butter &/or subdued genetics to implicate them.

A bar for novices who wish to be instant purists.

Aroma   8.7 / 10
dense vines, brambles, bromeliads, & orchids -> tobac leaf gleaned in its Nibs -> manioc -> cut lightly on high by CCN-51 likeness of cinnamon (+ peanut too) -> a floral struggling to bud -> oh... & a solid cocoa
Mouthfeel   14.1 / 15
Flavor   48.3 / 50
slides in a white choc countenance –> coconut cream -> plantain -> breadfruit / fruit apparitions (lucuma & naranjillo, naturally) counter-pose to clean bitter (stripped balsa wood bark) -> small salt inhalation -> mushroom paté studded w/ pink pepper & earth elements -> salted cocoa nut -> nails it at the end w/ pure cocoa flush to seal the deal
Quality   19.4 / 20
A bit vague yet sensational for its unsweetened category. A chocolate without any sugar support, only a grain or two of salt which beautifully & ultimately draws it out, of what must be among the most accessible 100s ever. Though tame compared to Pralus’ Le 100, it belongs in the same class – namely, world-class to christen this Zotter’s ‘Das 100’. And in many ways more likeable, without all the bracing high acidity coming from Madagascar, which, admittedly, harvests more of the fruit rainbow found in cacáo.

Sure, the progression catches some rough edges, especially past the mid-palate but manages to stay in control, never taking a tumble. Instead, this Peruvian holds its poise to deliver that chocolate knock-out at the finish. And Zotter just dares it with an equally gentle roast & a conche to coax.

No added cacao butter listed on the label either, yet there must be some given the rather low profile & all those ‘white notes’ at the front that veer toward Semi-Dark chocolate territory. Either that or this is the mildest bean to come from an origin that traditionally brings unruly fruits to the table &, worse, a lot of dirt (though this is changing as Peru improve both its post-harvest methods & gene stock). The amiable Herr Zotter himself claims in a follow-up conversation that the unctuousness springs from a bean containing 56% natural oil (cacáo butter fat; among the highest produced; [cacáo typically contains 50-53% fat content with some varieties scaling up to 60%). Plausible. Since transparency & integrity rule the house of Zotter (unlike the M.O. of many chocolate makers) it all sounds credible too. Further investigation with the research station in Tarapoto Peru confirms it.

Grown by the same co-op from where Tcho sources its Peru. Similarities abruptly stop there. The handling here so careful. Zotter got the pick of the crop from this 4-5 day fermentation at Tingo María.

Hardly a newcomer, El Naranjillo Cooperative started in 1964, in the spirit of Catholic missionary Gabriel Sala who worked to organize the activities of forest peoples in the late 19th century.

Many have descended on this agri co-op to certify it, so much so they labeled up to the max: Fair-Trade, organic, 40 cents, Starbucked... the endorsements continue to grow... a small sampling of the 400 or so int’l organizations, plus more rushing to the scene hoping to cash-in & sanction the “3rd World”. Meanwhile, JFK Airport in NYC would pass for a bus station in many impoverished countries. Just one more reason John Jr. flew in & out of Teeterboro.

They list in the mix “Criollo, CCN51, ICS, Brazil, local varieties”. Before anyone dismiss the first entry (Criollo) as completely out of hand, consider that in the 1700s Hípólito Ruíz visited near Tingo María, & FJ Pound surveyed the region on his fabled expedition in 1938 in search of disease-resistant strains but also because of its renown for “a high-quality cacao” from “large & tall trees, some well over 50 feet”, starting at the town of Yurimaguas – the ‘Pearl of the Huallaga’. Though unspecific, some credible accounts classify 2 types in the valley: Criollo & Nacional. Hmmm, for as verified in 2010, Peru grows genuine Nacional, introduced to the market in 2011 by Marañón Canyon Cacao.

Just as the Aroma spells CCN-51, the dominant taste of this bar suggest some real pedigree.

In addition to cacáo, the co-op promotes agritourism because the fundamental problem for Bromans / cacaoteros (cacáo growers) is that the world (& primarily Africa) produces too much cocoa for the cheap commodity markets. So noble efforts such as theirs fight a perennial uphill battle that keeps getting steeper & seemingly longer (without or without Sisyphus’ rock to weight them down).