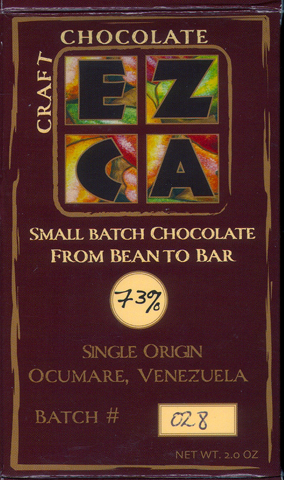 Every year in its foothills a congregation from a syncretic religion gathers to worship the sensuous María Lionza, a k a Yara, a native perhaps of Caquetío or Jirajara heritage, mother of all spirits, who rides in on a tapir - that local herbivore related to the African rhino. A cross between Burning Man Fest, a Tony Robbins seminar, & a pilgrimmage to the Ganges during Kumbh Mela, followers set-up altars festooned with fruit offerings, flowers, candles & statues, then hop around in a fire dance – some putting burning wood in their mouths to build fuerza (“strength”) – under the direction of a shoe salesman for 51 weeks of the year & a spirit medium for 1.

Hallot Parson, the chocolate medium behind Escazú, could’ve forged this in the bonfires at Sorte for all the many santos malandros (holy criminals) there. It’ll have eaters everywhere speaking in (forked) tongues.
Appearance   3.8 / 5

Aroma   6.3 / 10
almonds lollying around in heavy diesel & creasote (fumes drifting in from Chocklat’s Ocumare) -> lights up hashish -> pine cones & distant whiff of pineapple -> settles on leather next to raisin-licorice (some same-suspects in Ezcazú’s Carenero) -> ultimately exhales red plumes; burlap & jute on the rubdown
Mouthfeel   9.7 / 15
Flavor   22.4 / 50
fires up charcoal & creosote -> brief licorice-raisin -> humus -> molasses -> leaves big carbon footprint by leaving the gas & electric on to fry the ground cherry -> distills cocuy-agave liquor
Quality   6.9 / 20
Either from Brazil’s small Ocumare stands or from the bottom of Venezuela’s barrel. Plagued in every aspect – starting with ferment & drying onward, so by the time it reached the conche it was far too late.

Seems eerily sourced from the same supplier as Choklat’s Ocumare 80. Now it’s clear why that bar tried to butter over this carnage.

Escazú chooses a different cover-up & desperately attempts to incinerate the evidence thru hot-house roasting. Ocumare is a primordially high-note cacáo of soft upper register fruits. If handled too aggressively there’s nothing left - precisely what this delivers.

Either way, this double crime scene is suspiciously linked & both should go back to the source to complain & demand a refund.