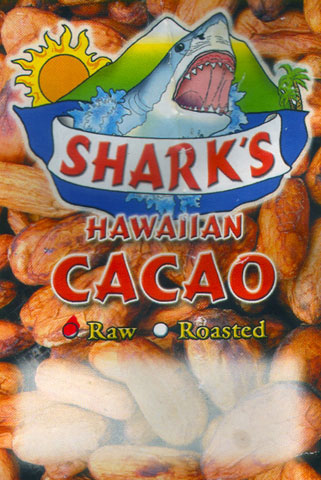 Impact
Baby, there’s a shark out of the water, shocking the population of taste-buds which failed to escape its path.

In previous ventures, amphibious-landlubber Tom Sharkey swam ashore to feed off grapes on the vine, among weeds in the bush & now, in a natural progression, bumping into Theobroma cacao trees on the Big Island of Hawai’i.

Forget those freeloading on the corporate Dole at Waialua, The Shark-man cometh as the current go-to dealer among the local chocoscenti for the good stuff.

Vintage: November 2016
banana-chanterelle paté -> black walnut rear
Quality   18.1 / 20
Even in their raw / unroasted state, these beans reconfirm the wonder to Hawai’ian cacáo. Fruit-laden with kind, expressly gentle core-cocoa that translates into soft foundational chocolate. Nearly zero bitterness & that which appears comes savored or spiced, as in those sandalwood endnotes.

Harvested from Tom Sharkey’s grove of a couple hundred cacáo trees on the big island who, in the judgment of Madre’s Nat Bletter & several others, grows some of the best in Hawai’i.

In addition to their DNA which the Shark suspects hails from some pedigree, he applies a correct & ever-advanced ferment in cascading wood boxes & the time-honored sun-drying method.

It all comes so true in these seeds.