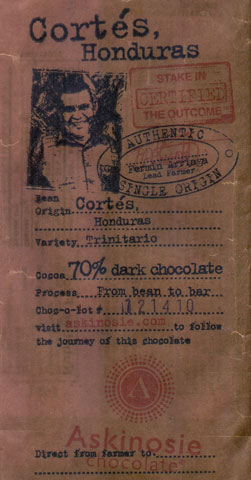 Impact
A bumptious bar so retro-American that even Hernán Cortés might’ve encountered its likes in the 15th Century to propel his conquest of the New World
Appearance   4.5 / 5

Aroma   8.3 / 10
potent strangler fig sitting on a biscuit -> orange marmalade -> rubber bounces copal & leguminous Honduro tobacco
Mouthfeel   13.9 / 15
Flavor   38.1 / 50
slow starter then goes on a cocoa tannic tear -> ripping volatile (moraberry) -> breadfruit with a salt hit -> tangs along to that orange marmalade sensed in the Aroma -> intensifies to pink grapefruit -> berry makes sour re-appearance with sharper edge -> brownie at the edges -> catches almond skins going down the throat
Quality   15.9 / 20
Almost reminscent of Askinosie’s smoother Tenende from Africa which goes to show just how much of a house-style pervades his bars crisscrossing 2 continents separated by an ocean. This Cortés though a little less in check; nerve-fraying & brassy to the point of tearing the structure apart, which it manages to hold however, while leaving it somewhat imbalanced.

Shawn Askinosie sources these beans as has become his custom thru direct P2P trading (Person-to-Person). He tapped Fermin Arriaga who cultivates a cacáo grove upstream from the Port of Cortés with limited due diligence regarding genotypes. As such, this lacks the seed selection found in Red Star’s Indio Rojo (for ‘Indian Red’) from a nearby valley. Where that fools of special heirloom Criollo brokered by Xoco Fine Cocoa Company, this is more obviously hybridized.

Other than Texture – almost eerily similar to sleeping with a new partner who feels exactly like an ex-lover, despite this containing no lecithin which Red Star’s does, perhaps indicating a common trait of terroir – these 2 cocoas of the same country vastly diverge. Different gene pools & different techniques produce dramatically altered tastes. The difference being one that contains core chocolate flavor while the other sorely misses it.

This the rambunctious retro-American bump that Hernán Cortés himself might've experienced when he conquered the New World, next to Indio Rojo’s more streamline if stout character in keeping with a European slant. So identifiable in their role-reversals the two bars should trade names.

To confuse matters even further in support of such a swap, this tastes of what many in Central America, especially beyond Honduras, call 'Indio Rojo' (namely, typical Trinitario, i.e., ‘a little bit of this, a little bit of that’ & lot of just about everything in between, very suitable for that catch-all mob term). In short, severely cluttered, even dirty tasting.

That aside, a chocolate for those inured to the Askinosie approach (Type-A adrenaliners): intense & no-holds-barred boldness.

All others, be forewarned.