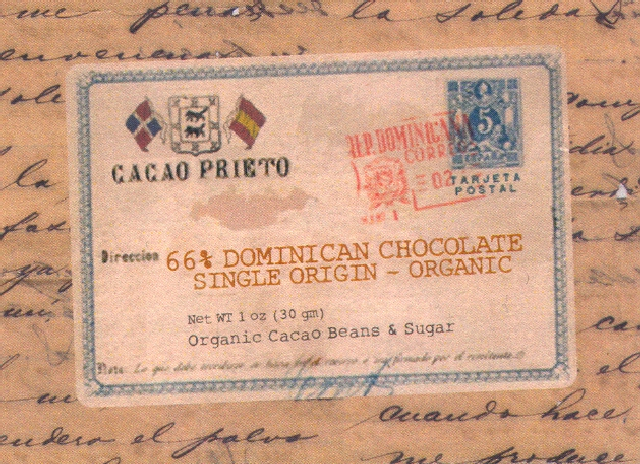 Aroma   8.8 / 10
similar to Prieto’s 72 except warmer / less raw, roasted more to express brown sugaring & the Picholine that just screams -> ultimately goes banana
Mouthfeel   11.6 / 15
Flavor   41.9 / 50
quick spice (cardamon / cilantro) -> chocolate flash -> fig settles in for the length -> modestly sweetened & brightened by mango -> develops gradually toward mild cocoa with caramelized finish; draws some chalk in the dust up
Quality   16.8 / 20
A Valrhona-like 66% in a nod to Soma’s take on the same origin. Those show bigger fruit-fests however.

Even truer parallels for this lead to Bonnat’s Cuba. Both deliver predominately fig-inflected bars. The historical connection between the Windward Passage that separates the 2 islands: the French planted cacáo trees on each of them.

In addition to the sugar, Prieto roasts a little warmer to reduce most of the raw chocolate effects seen in its 72%. This clips off the highs in service of solidifying the base, building stamina as well as strength despite, presumably, less cocoa mass (although the grain in the Texture suggests, among other factors such as increased sugar & decreased conching, that this 66% may also contain proportionately less cocoa butter to alter the mass-to-fat ratio).

Variables aside, a better chocolate from Prieto. Expect more & better still to come.