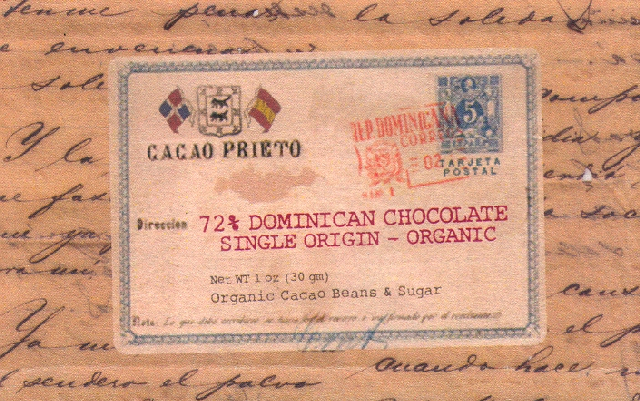 Impact
The starter bar from Cacao Prieto. In violation of the C-spot’s™ ‘2 kewl 4 skool’ policy which cautions against reviewing a new barsmith until it learns the ropes (usually a couple years; though assiduous seed selection ala Red Star's Indio Rojo flexes the rule a bit), Prieto deserves early mention because it takes a fierce tact, an all-encompassing approach, when it comes to cacáo. Basically Tcho... cubed. Whether it can pull it off is future-pending. If it succeeds, it’ll be the most advanced move in chocolate since the company-town dreamers of Menier, Cadbury & Hershey’s™.

Too much heat & the front fruits burn up; too little & the more raw cacáo factors predominate as they tend to toward the finish in keeping with the ‘live-food’ vogue all the rage nowadays.

Shares some personality traits with Soma’s D.R. but, alas, this lacks the warmth of the Canadian maker’s craft. In essence it tastes of 2 bars: that vertical shear followed by a horizontal flat.

Prieto out of the islands (it plants one foot cultivating cacao in The Dominican Republic) still getting its sea legs, or, given its other foot squarely placed in Brooklyn for manufacturing the beans into chocolate, its subway legs.