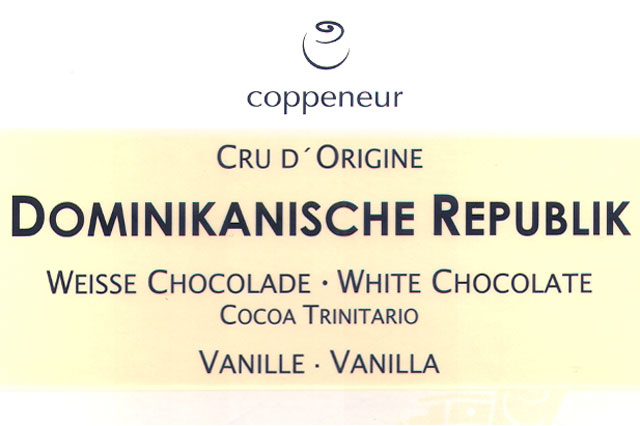 Impact
Aussie author Boris Glickman writes in An Absence of Presence that some things are defined more by their absence than by their presence, their vacancy having more intensity & power than their being. When they leave, their absence begins to acquire distinctive characteristics that their presence never possessed. The presence of their absence assumes a reality all of its own, becoming almost tangible. They develop meaningful & happy relationships with the vacuities that were never enjoyed in their actualities.

By contrast, other things exist only as outlines, defined by the presence of something around them &, when gone, fade into nothingness.

White Chocolate extracts the wholesome void of cacáo. What it lacks in “cocoa mass” it compensates with enharmonics – those traces of Dark Chocolate analogues (less profound & pronounced, but there nonetheless). And of course, the mouth... that over-the-top orgasmic texture / bodymelt, the love affair for all ‘Whiteys’ owing to cocoa butter’s structure, especially if perfectly-tempered into Beta-V crystals.

Some even profess it self-pleasures better than solo sex or a 1-night stand routine. Safe & healthy, maybe it beats (depending on the experience) jumping into bed with someone who can’t remember your name in the morning because they never asked for it in the first place.

This, a spitting mirror-image of a Great White... merely reflecting the opposite, namely, a presence of absence.
Appearance   3.4 / 5

Aroma   7.6 / 10
vanilla iced-cream -> casein from the milk powder proteins
Mouthfeel   10.8 / 15
Flavor   38.2 / 50
vanilla ice-cream with the cone attached -> machine oil -> unusual (for White) peat quality -> minor cocoa butter back
Quality   16.7 / 20
Georg Bernardini’s white-swan song who, as director of sourcing & quality management, guided Coppeneur from the shadow of a Pralus understudy (both companies shared similar roasting preferences plus an estate at Nosy Bé, Madagascar for a while) into the most ambitious, tenacious, & possessed barsmith on Earth. For an 18-month period during 2009-10, it surged to the pinnacle of the chocolate world with that distinctively German trait of full-scale engineering: assertive, loud, & overpowering bars of science. Cosmopolitan in character, international in flavor, practically every bean Coppeneur touched was Midas correct.

Time will tell how it fares with his departure.

Georg always proved daring whether in bean selection, origin, or high-percentage chocolate, repeatedly scaling the 100% cacáo-content peaks or the minimally sweetened ones. Unsurprising then that he’d man-up when the most macho ever wouldn't even dare & do the most feminine format in the craft: White Chocolate.

This, however, is not any residual oil pressed from Coppeneur's Buena Vista, D.R. bar. For starters, that could be the problem.

From appearances alone it looks to contain more than the listed 1% vanilla. (Note to Zingerman’s / Askinosie: a little goes a long way.) From the flavor perspective, it’s an excellent vanilla.

But where are the butter factions?

Hidden beneath a confected miscue (decent, such as it is, though more proof that Coppeneur’s bar and box werks diverge) that probably hits its intended target but misses the mark wide on chocolate exposition. Vanilla obscures all of cacáo's character & even covers the sugar sweetness level in a savory cloud. The total effect overspiced on one hand & rather muted as far as chocolate goes on the other, almost as if the cocoa were unroasted.

Finally, the Textural mishap. It can probably be attributed to soft-butter genes.

A bar that sort of confirms a regression of type for the entire Coppeneur Dominican Republic Series (from 92% and 72% to the 52% Dark-Milk & now this): dilution equals diminution.

And it answers the question about Coppeneur, unsatisfied with its success at higher cacáo percentages, deciding to give cacáo from The Dominican Republic away by giving it the treatment, first with sugar, then milk & who knows what next?

Let it be known: a White Vanilla.