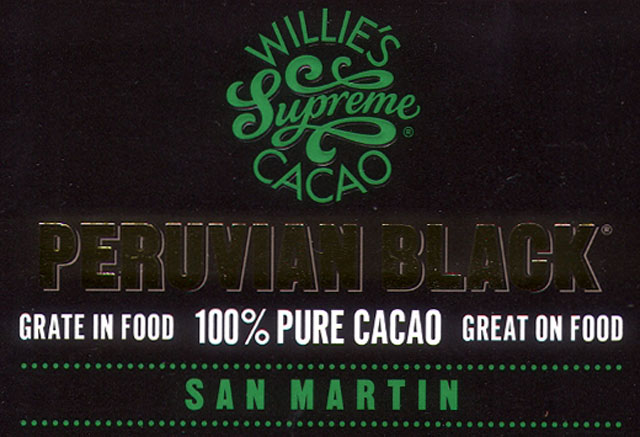 Impact
This choc has a beef... with itself. Arguing back & forth while looking both directions crossing a one-way street.

About as primitive as alpha-cats ‘n doggs, aka a hip-hop hypocrite bitch-smack, donning a bullet-proof girdle on the battle track.

For the love of Benjamin. Just bizniz; & dert-shiz sells where violence is prosperous.

Aroma   9.1 / 10
direct from the source: chocolate pudding on a cloud forest -> fermented photosynthesis (Never had ‘fermented photosynthesis’? Then someone needs to take a walk far outside the city limits & well away from suburbia) lead to rotting vines (tell-tale CCN-51) -> chunks of ingrained fudge + brazil nut on the break with a ping of fruit in the middle
Mouthfeel   13.7 / 15
Flavor   30.1 / 50
dirt -> stone -> metal -> beef bouillon -> minerals alight a few green leaves -> bitter bark going down the hatch -> coffee dregs at the very bottom
Quality   12.6 / 20
Around the turn of the millennium, most chocolate out of Peru to hit the consumer markets in the northern latitudes came from the San Martin area – the upper central part of the country. It was typically sharp & nasty due to shoddy post-harvest practices, earning Peruvian cacáo the same reputation as dirt. The fact that most of the fields surrounding San Martin are planted with CCN-51 did little to erode the impression.

Then Zotter captured incredible finds around Satipo. Next, Rougue went east to return with his gorgeous Piura seed-lot. And Marañón Canyon unearthed the treasure of the genuine Nacional way up north toward the border with Ecuador.

Suddenly quality cacáo in Peru is all over the place.

That forces San Martin to pull its act together if it wishes to compete in the 21st Century craft chocolate era.

Judging by this block of chocolate, it still has a ways to go. The kind of stuff that helped Peru build its dirty rep in the 1980s/90s. For a flavor of just how far, compare to Zotter’s Das 100 also from Peru.

Willie’s fractional roast further accentuates the negative. About the only redeeming feature: Texture measures up to voluptuous, shielding this bean’s aggression behind sumptuous cocoa butter.