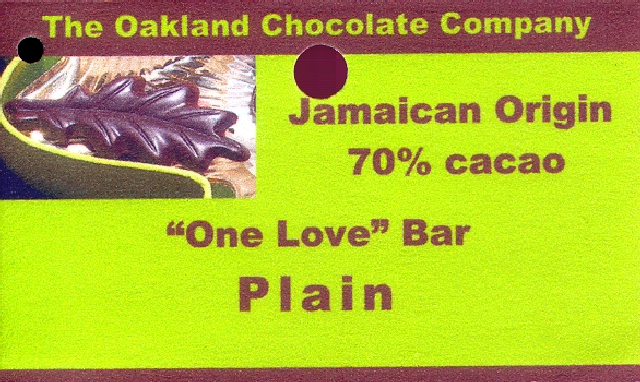 Impact
Easy, mon as in ‘easy-does-it’ allows this to live up to its name of Plain (& deceptively simple... as in extra-ordinary). Almost sidereal: a Chocolate-champagne, the latter popularly associated with the Benedictine monk Dom Pierre Perignon (1638-1715). Although he neither invented nor discovered it, he founded many principles & processes in its production that are still in use today. Upon sipping the bubbly he reportedly declared, “I am drinking stars.”

This bar amounts to champagne for less than the price of beer.

Which all points to this bar’s redeeming feature.

Jamaica can be a fragile cacáo. Industrial or even vintage equipment could’ve laid this to waste.

Oakland Chocolate Company calls it about right & brings justice to the origin. If it goes even a little hard, giving this the rough treatment, the bar would’ve sacrificed the few delicate compounds it possesses &, in the process, threaten its charming humility.