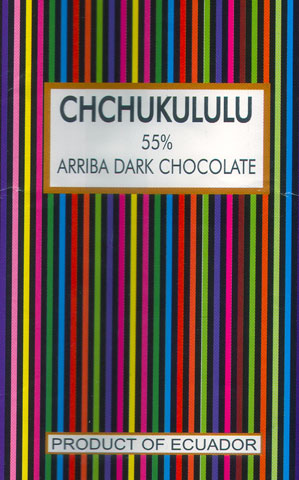 Impact
Some bars are full of you-know-what. This one's got a load of genuine love craft.

Chchukululu appears as a Quichua loan-word from Aymara for ruiseñor or gorrión, meaning “singing bird”. Lourdes Delgado chose it for her label because phonetically it sounds like “chocolate”, & her nickname besides is Lulu.

She must be living an innocently charmed life.

The world & his dreamed nightmares within it so spooked him that humans too took on evil countenance, hence Lovecraft’s own racism.

For instance, The Call of Cthulhu whose very title becomes a test to hear whether human vocal chords can reproduce syllables of a truly foreign language.

Lovecraft famously begins his short story with “The most merciful thing in the world, I think, is the inability of the human mind to correlate all its contents" in a rather encapsulated definition of cosmicism: lost at home.

Cthulhu itself is a “pulpy, tentacled head surmount[ing] a grotesque scaly body with rudimentary wings”. It currently lies "dead [but] dreaming" in the submerged city of R’lyeh somewhere in the southeast Pacific Ocean (off the coast perhaps of... Ecuador?). Though quiescent, Cthulhu will eventually arise, preceded by worshippers of the Deep Ones repeating Ph'nglui mglw'nafh Cthulhu R'lyeh wgah'nagl fhtagn (In his house at R'lyeh, dead Cthulhu waits dreaming) for “That is not dead which can eternal lie. And with strange aeons even death may die”.

After chewing on that preceding line for a while, ruminate then on this trembling pith from Supernatural Horror: "The oldest & strongest emotion of mankind is fear, & the strongest kind of fear is fear of the unknown."

Yes, all in perfect consonance & delight to engender a sense of foreboding, insanity & inevitable doom.

Lest anyone take flight with fright, here’s a bar that sums up less into a Necronomicon (or a chocolate prescribed by the law of the dead) than a grimoire fantasy. As innocuous as a bird mating call in the rainforest where the listener stands remotely... far, far away... ch-ch (think Bowie’s “ch-ch-changes”) choo koo (the Walrus’ goo goo g’joob) lu-lu (for Lourdes "Lulu"" Dalgado singing in the shower).
Appearance   3.2 / 5

Aroma   6.9 / 10
bewitched: nutty cocoa gives way to the dominant musty scent (jute / cotton / cardboard) -> spice & forest herb lurch in the dust -> granny’s powder room fragrance; potent if disquieting for 55%
Mouthfeel   12 / 15
Flavor   42.9 / 50
Eldritch wizardry puffs forth from such Aroma: simple choc gilded in fleeting florals, their retrenchment allows for nuts to shift the progression to caramel & vanilla, then brittle toffee (including a small glutamate spot) -> brief coffee & roasted barley -> chocolate on the rebound with trace orange blossom -> leaves behind a peanut (friendly CCN-51 remainder?) backed in a penumbra of paper card stock
Quality   16.1 / 20
Nothing foreboding nor forbidden; another private-label brand instead. The menu appears thus: pick a region (Manabí); select a co-op or fermentary selling cocoa beans (like, if not exactly, Fortaleza); run to a manufacturer (Tulicorp & share in common a 55% formulation with Caoni); wrap a private label around it printed with legends of a mythical Swiss traveler named Carl August Goldsselman (about whom there are few clues... even scholars that conduct research for a living can't seem to find that name in the record documents... but, then again, they aren’t really looking for that guy either) who, we’re told, heard tales of fine flavor cacáo flowing from “de arriba” (“up river”). Sprinkle on some gobsmack about how the gallery of gods favor Ecuador’s privileged place for “fine-cacáo” &, ahí está, deliver to consumer markets. 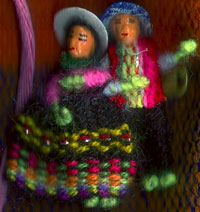 It also helps to slide contents into a woven cloth sleeve with Sr. & Sra. Campesino Ecuador dolls (the Mr. & Mrs. Gothic America of the South) to make it all gringo-appropriate. (Of course, if any Anglo trots out the same imagery, accuse him of cultural insensitivity or, better still, virulent bigotry).

Damnedest thing though: it all works!

Sure it feels moderately Dutched; the cocoa pretty base; the sugar cooked in the conche long enough to virtually caramelize which, hey, renders a perfect verisimilitude of childhood chocolate in the pantry.

This ain’t about high chocolate art. It’s all about Lourdes Delgado.

One of those humble bars right up there with Grenada 60% that charms way too lovably to pour any Haterade on.

Even Lovecraft would recognize that, just as it might give him a new sense of his very name 'love-craft' which in any language could translate into 'sincerity'.