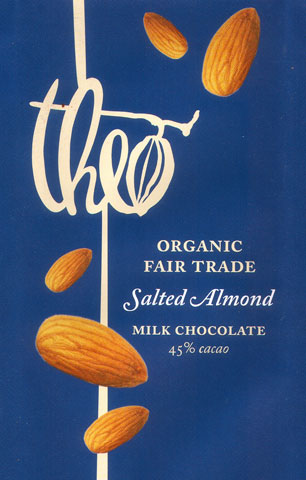 The twain -- the ocean floor / the highest peak -- somehow join together... in your mouth at the soaring depths of savor.

Add in the other inclusions... dairy from maybe the Land of Milk 'n Honey, Madagascan vanilla no doubt, almonds out of California, cacáo from who knows how many sources & this forms a piece of globalism writ small.

Clearly globalization works -- at least in this instance -- but more like 'gobble-ization', as in Pac Man of the rest of us by this filthy rich confection.
Appearance   4.3 / 5

Nothing conflictive as with Theo's Ultimate Dark (presumably the parent formula blend for this) nor contrastive as its Salted Almond Dark. Just straight up as the elements stack atop each other in a steep vertical drop... deep... deepest... & deeper still.

Technical problems aplenty but the goods still overwhelm to cover up the fault lines in an echo of Zen Master Shunryu Suzuki (1904-71) who spent a fair amount of his life's journey in Theo's neck of the woods on the West Coast USA: "Everything is perfect & there is a lot of room for improvement".